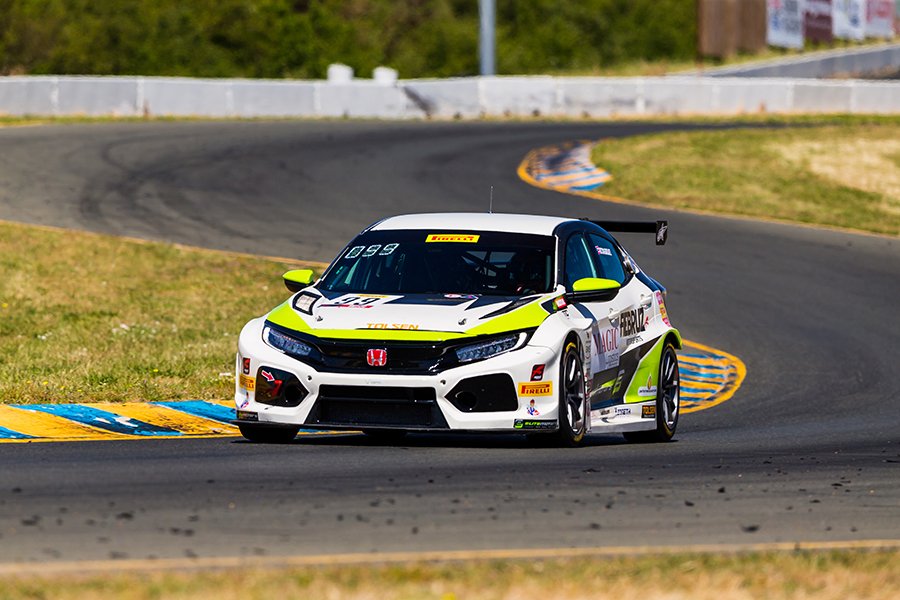 VGMC Racing’s Victor González took his maiden win in TC America at the end of a thrilling race that was led by Mason Filippi first and Michael Hurczyn later. This was also the first victory in the current season for the Honda Civic that had won the 2018 title with Ryan Eversley.
After winning both races in the season opener at Austin’s COTA, Filippi had skipped the two following events at St. Petersburg and Virginia International Raceway due to clashing commitments in the IMSA Challenge. He came back at Sonoma ready to resume the winning streak at the wheel of his Hyundai Veloster N. He set pole position and took the lead at the start keeping Hurczyn’s Golf GTI at bay. The pair fought for the first two laps, then Filippi built up a gap of a couple of seconds.
Behind them Hurczyn’s teammate Nate Vincent overtook the Honda Civic of Harry Cheung, moving up to third. Cheung’s pace continued to fade and he dropped to the back of the field.
Halfway through the 40-minute race, Filippi made contact with a slower car of the TCA class, damaging the front splitter. From that moment on he lost his pace, which helped Hurczyn and Vincent to close the gap. On lap 15, Hurczyn passed Filippi on the outside at T1 and took the lead; a couple of laps later Vincent tried to steal second from Filippi, but missed the braking point at the hairpin and collected the Hyundai. González who was following them took the opportunity to move into second place and so did James Walker into third.
In the final laps, Hurczyn was clearly in troubles with the tyres, Gonzáles began to attack him and, despite losing momentarily the contact while passing a TCA car, the Puerto Rican driver eventually took the lead during the penultimate lap and won from Hurczyn and Walker.
Bryan Putt finished sixth overall and first of the DSG class, beating the other Audi cars of Christian Cole and the early leader Stephen Vajda.
Michael McCann, the winner of the first race in the previous event, did not make the grid after he rolled his Audi in the second Practice session.
In the championship standings, Hurczyn has stretched his leading gap to 33 points over Vincent.
Race 2 starts at 9.35 local time on Sunday (22.45 CET); live streaming at www.tcr-series.com and www.tcr-series.tv.