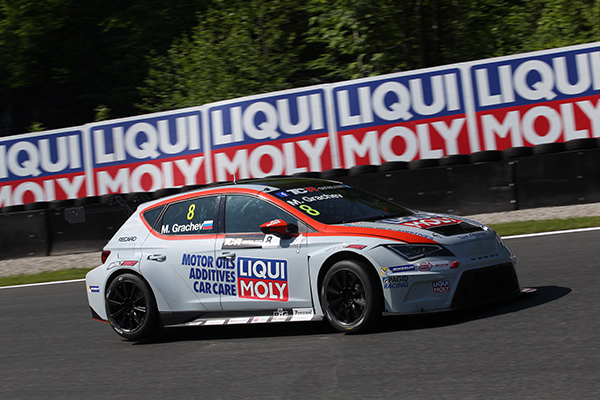 Grachev: the man who already won at Sochi

Mikhail Grachev is not only the sole TCR driver who has already raced at Sochi Autodrom, he is also someone who has written history there, as he won the very first race that inaugurated the track last year, a Russian Circuit Racing Series round held shortly before the Russian F1 Grand Prix.
The 27-year-old from Omsk, who is campaigning the full TCR International Series season for Liqui Moly Team Engstler, is of course proud of this achievement and excited ahead of his home race: “It’s a nice and fast track, more technical than it looks, where slipstreaming will play a key role. To race in the middle of the Olympic Park is quite special.”
Grachev’s career has developed mostly in Russia, first in karting, which he had to stop in 2007 following a severe back injury. He then shone in autocross, taking two national titles, and touring cars, with two RCRS titles in 2013 and 2014. Last year saw him entering the European scene, in the FIA ETCC and the German ADAC Procar, winning races in both series.
“The TCR was a perfect next step for me, it’s a very highly-competitive series, where driving skills make the difference, and I also enjoy the technical work,” reflects this economist by background who defines himself as “a self-educated automobile technician.”
Grachev has only words of praise for the support received at Team Engstler and the quality of their work, although his first season at international level has been quite challenging so far, not last because the team has been using two different cars, the Audi TT and the SEAT León, in the first part of the season.
“It has been a roller-coaster until now, he reckons. “My pace has been good, but there have been mistakes and incidents preventing strong finishes. I take it as a learning season, trying to advance step by step. I don’t know most of the tracks, the level is very high, with many experienced drivers, and racing is very close, you can’t afford a single mistake. It takes time to put all the pieces of the puzzle together, but I feel I can do much better.”
As an ice hockey player in his leisure time, there is no doubt that Mikhail has the right determination and fighting spirit to succeed. He wouldn’t mind to show it at home next weekend!