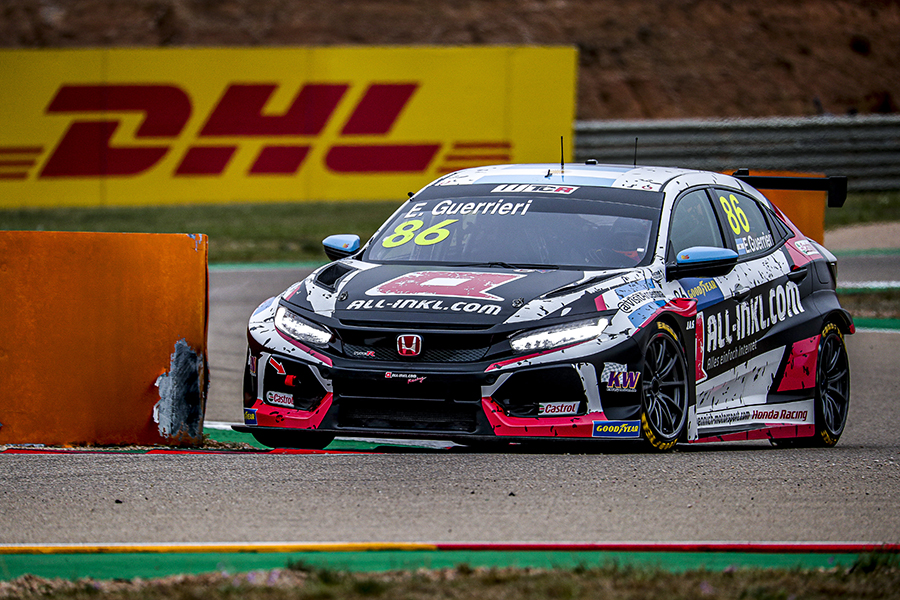 Honda fellow drivers Esteban Guerrieri and Néstor Girolami made a risky tyre choice to finish first and second in the WTCR’s Race 1 at Motorland Aragón. On a track that was still damp but began to dry under the morning’s sun, the two Argentines went for slicks on the front and wets on the rear, while their rivals opted for full slick sets.
Girolami started from P11 and took the lead already during the first lap, while Guerrieri – 16th on the grid – moved into second in lap 3. The two Civic cars created a gap and for the rest of the race Girolami led until he slowed down during the final lap and handed the victory and five precious points to his teammate who was thus able to reduce his gap in the standings to Yann Ehrlacher – sixth at the end of the race – from 31 to 16 points. The podium was completed by Gilles Magnus who also had chosen a mixed set of tyres.
At the start Santiago Urrutia took the lead from the pole ahead of Mikel Azcona and Girolami, while Jean-Karl Vernay – second on the grid – was swallowed up by the drivers behind.
During the opening lap, Girolami moved into the lead ahead of Nathanaël Berthon and Azcona, while Urrutia dropped back.
Magnus elbowed his way up the field and passed Azcona for P4 in lap 2 and then Berthon for P3 in lap 6. There were several close battles amongst the mid-fielders: Luca Filippi and Thed Björk collided in lap 4, while they were fighting for P10; the Italian hit a stack of tyres and retired. Towards the end of the race, Tiago Monteiro went off while trying to pass Yvan Muller for P7 and lost a front tyre.
During the final lap, Girolami waited for Guerrieri and opened him the door to take the win, Magnus was third ahead of Berthon, Azcona and Ehrlacher who completed a cautious race; Muller, Vernay, Urrutia and Attila Tassi – who had started from P20 – rounded off the top-ten.
Race 2 takes place at 13:15 CET, with Muller starting from pole position with Michelisz alongside him.