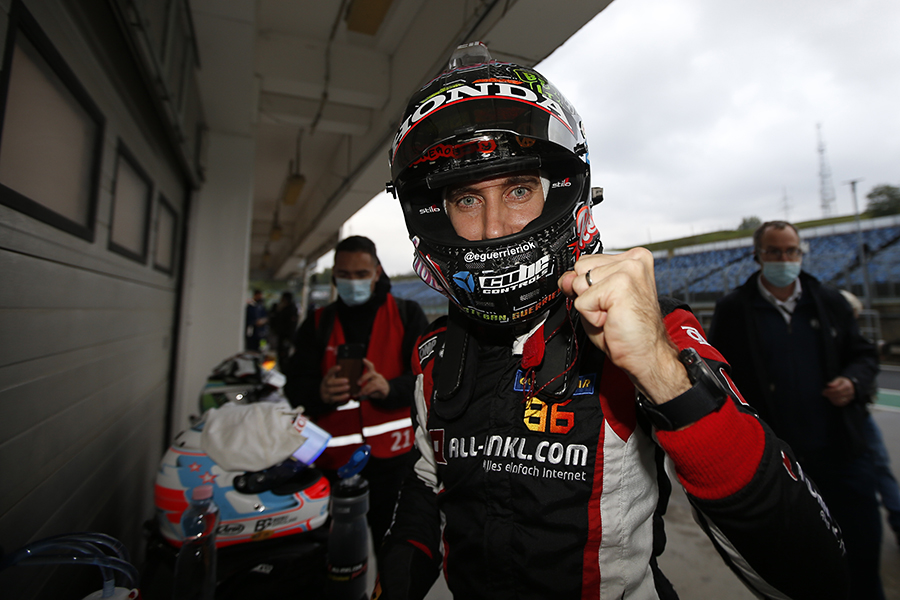 Guerrieri resists the pressure from Ehrlacher to win Race 1

Esteban Guerrieri converted his pole position into a lights-to-flag victory in WTCR’s first race at the Hungaroring. The Argentine took the lead at the start in his Münnich Motorsport Honda Civic and resisted for the whole race to the pressure from the Cyan Racing Lynk & Co 03 of current points leader Yann Ehrlacher.
Guerrieri’s teammate Néstor Girolami completed the podium in third position ahead of Ehrlacher’s colleague Yvan Muller, while Hungarian youngster Attila Tassi finished fifth rounding off the leading group comprised only of Honda and Lynk & Co cars.
Sixth – and surely the most disappointed driver of the field – was Mikel Azcona in the Zengő Motorsport CUPRA Leon Competición who spoiled all his chances with a poor start from P2 on the grid.
Guerrieri made good use of the pole at the start, while Azcona nearly stalled and dropped from second to eighth. Guerrieri led from Ehrlacher, Muller, Tassi, Santiago Urrutia and Girolami; the latter soon overtook Urrutia, Tassi and Muller, moving into P3. In lap 3, Azcona passed Jean-Karl Vernay for P7 after they swapped paints a couple of times.
Guerrieri held on to the lead despite the relentless pressure from Ehrlacher; Girolami defended P3 from Muller who was chased by Tassi, while Azcona moved into P6 after passing Urrutia and began threatening Tassi’s fifth place. They ran abreast for a while and despite Azcona hit the back of his car a few times, Tassi was able to retain the position.
The two final laps saw the leading trio of Guerrieri, Ehrlacher and Girolami covered by less than one second, but the positions did not change, and so they filled the podium in the order, with Muller capable of retaining the fourth place from Tassi and Azcona. Urrutia, Vernay, Luca Engsler and Thed Björk rounded off the top ten.
In the championship standings, Guerrieri has eaten away five points at Ehrlacher’s leading margin that is now of 23 points, while Tom Coronel, who was second before this race, dropped to third six points behind the Argentine.
Race 2 takes place at 12:15 CEST, with Bence Boldizs starting from pole position alongside Yvan Muller.