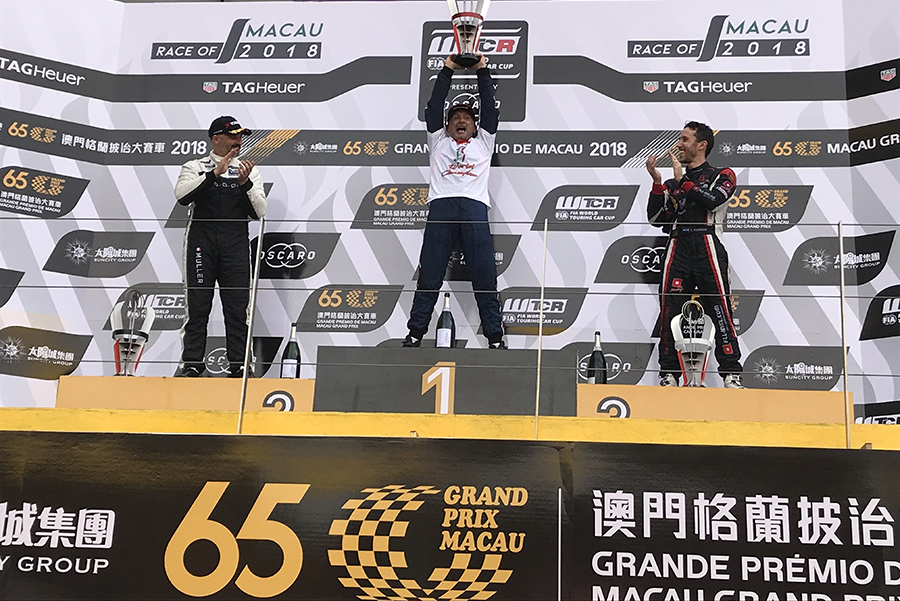 Guerrieri wins behind the safety car and Tarquini is champion

Esteban Guerrieri emerged as the last winner of a thrilling WTCR inaugural season as he took a lights-to-flag victory behind the safety car in Macau’s Race 3. Gabriele Tarquini finished 10th and was crowned the first ever champion of the FIA World Touring Car Cup beating his fellow Hyundai colleague Yvan Muller by just three points.
At the start, Guerrieri was faster than pole sitter Rob Huff and took the lead, while Jean-Karl Vernay overtook Norbert Michelisz, moving up to third and Muller passed Yann Ehrlacher for fifth.
Timo Scheider and Race 2 winner Frédéric Vervisch made contact while braking at the Lisboa bend and went straight in the escape road.
At the end of the first lap, Tarquini was in 9th position after starting 14th.
Two trios of cars were heading the field: Guerrieri’s Honda, Huff’s Volkswagen and Vernay’s Audi were fighting for the lead; Michelisz’s Hyundai, Muller’s Hyundai and Ehrlacher’s Honda were involved in the battle for fourth. Pepe Oriola, Kevin Ceccon, Tarquini and Thed Björk rounded off the top ten.
The safety car was deployed on lap 4 after Aurélien Panis crashed at the Solitude Esses; the race resumed on lap 6 and Björk overtook Tarquini for ninth.
Nothing changed until lap 10 when Vernay crashed from third at the Lisboa; then at the end of the same lap Zsolt Dávid Szabó crashed at the ‘R’ bend and the safety car was deployed again and circulated until the chequered flag.
Guerrieri claimed his second win of the season that propelled him to third in the final standings, Huff and Michelisz completed the podium.
The Teams’ title went to Yvan Muller Racing ahead of BRC Racing Team.