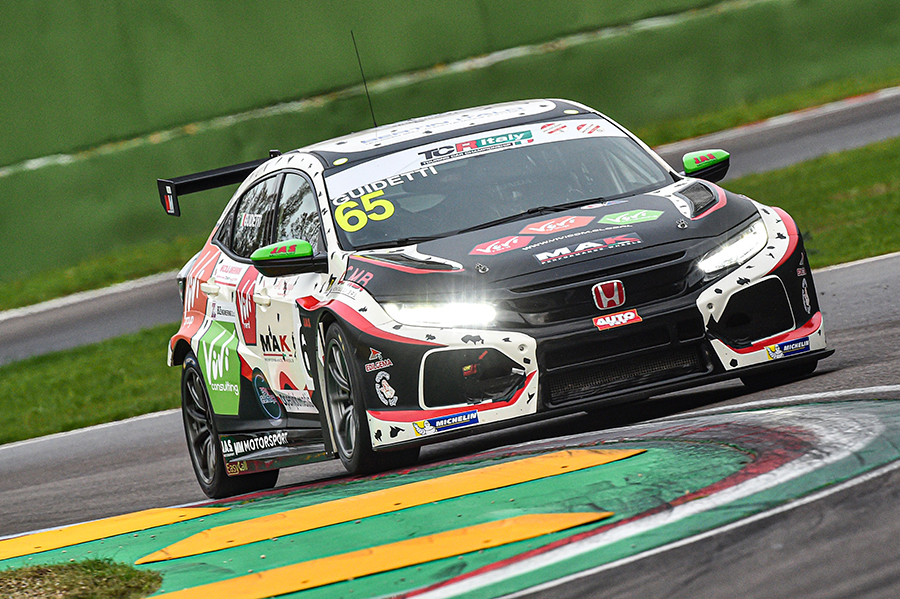 In a thrilling Qualifying session at Imola, Jacopo Guidetti pipped Eric Brigliadori to win pole position for the first race of TCR Italy’s season finale.
Guest star Mikel Azcona set the first competitive lap of 1:53.808, but Marco Pellegrini (1:52.998) and then Brigliadori (1:52.808) were able to improve on that mark. Azcona tried to respond, but his CUPRA Leon Competición stopped at Turn 7 with a possible technical issue and did not rejoin.
In the final moments of the session, Guidetti was timed at 1:52.422, but had this lap disallowed for a track limit infringement and so it was Brigliadori who jumped on top of the timesheet with a lap of 1:52.231, while Nicola Baldan clocked a 1:52.729 to move into P2.
But that was not the end yet, as Guidetti posted a 1:52.159 and stole the pole from Brigliadori by 72 thousandths, while Jonathan Giacon completed his last lap in 1:52.676 and squeezed into P3 between Brigliadori and Baldam; Pellegrini was demoted to fifth ahead of Felice Jelmini, Igor Stefanovski, Azcona, Evgenii Leonov and Ibragim Akhmadov.
As far as the title fight is concerned, Brigliadori leads the standings but he is now on equal points with the reigning champion Salvatore Tavano, courtesy of a decision from the Sporting Board of the Italian Automobile Club that cancelled a penalty imposed to Mauro Guastamacchia during the second race of the season’s opener at Mugello. This took two points away from Brigliadori who has an advantage in terms of results (three wins to one) but must drop two scores (three points, so far).
However, with Tavano starting Race 1 from 20th on the grid due to a technical issue, Brigliadori is in the position to stake a claim on the title.
Race 1 will start at 16:00 local time (CET) and will be streamed live at www.tcr-series.com.