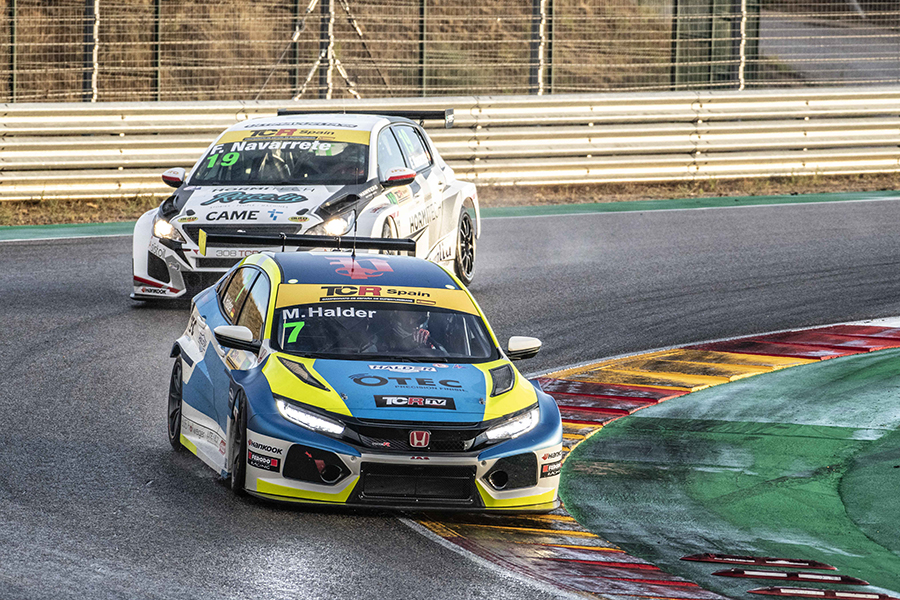 Hat trick of wins for Mike Halder in MotorLand Aragón

Mike Halder completed an impressive hat trick in TCR Spain at MotorLand Aragón, winning all three races of the weekend and scoring 130 from the 131 points at stake. The German driver increased his tally to seven wins from nine races and stretched his leadership in the standings to 116 points ahead of Fernando Navarrete.
The first race started Saturday evening on a wet track after a thunderstorm. Sergio López did not get away well from the pole and so it was Mike Halder who took the lead ahead of Navarrete and Michelle Halder. In lap 2, Alejandro Cutillas and Alba Cano passed Michelle Halder, moving into third and fourth. In the final part of the race, Cutillas and Cano passed Navarrete to finish second and third, but after the race the Stewards swapped the positions demoting Cutillas to third behind Cano.
On Sunday, Navarrete was on pole for Race 2 and led from Mike Halder and Cutillas. The latter passed Halder in lap 1 and then stole the lead from Navarrete in lap 3. Halfway through the race, Halder increased his pace, moved into P2 ahead of Navarrete in lap 6 and eventually took the lead in lap 8, despite Cutillas’ gallant resistance. Navarrete completed the podium and López beat Michelle Halder and Cano to finish fourth.
At the start of Race 3, Mike Halder squeezed between pole sitter López and Cutillas to take the lead. At the end of the first lap Cutillas retired with a technical issue, handing the second place to López, while Navarrete defended P3 from Michelle Halder and Cano. In lap 4, both ladies managed to pass Navarrete into Turn 1, with Halder third ahead of Cano. Up front, Mike Halder controlled López and went to take his third win of the weekend; Michelle Halder completed the podium with Cano fourth.
TCR Spain will resume at Valencia on September 18/19.