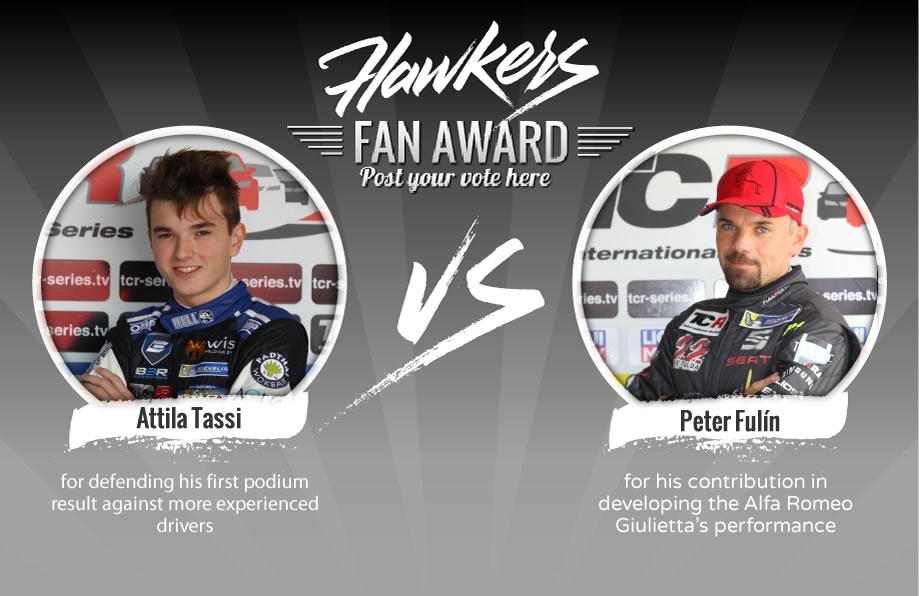 Two drivers from Eastern Europe have been nominated for the Hawkers Fan Award following their performance in the race meeting at Sochi, Russia: Attila Tassi from Hungary and Peter Fulín from the Czech Republic.
The 17-year old Tassi, who became the youngest ever podium finisher in the TCR International Series, claimed a brilliant third place in the second race, fighting on equal terms with more experience drivers such as Jean-Karl Vernay and Gianni Morbidelli.
Fulín only joined the series in the Salzburgring race meeting, but since then he has been able to contribute a lot to the development of the Romeo Ferraris-built Alfa Romeo Giulietta. And this was proved by his results in Sochi: fifth in qualifying, sixth in Race 1 and eighth in Race 2.

- Peter Fulín: for his contribution in the development of the Alfa Romeo Giulietta

Fans of the TCR International Series will may now vote on the home page of the website.
Scroll down and post your vote now!
You will immediately see the percentage of each candidate after your vote.
Voting is possible until midnight of Wednesday, July 6. The final results will be shown on the website on the following day.