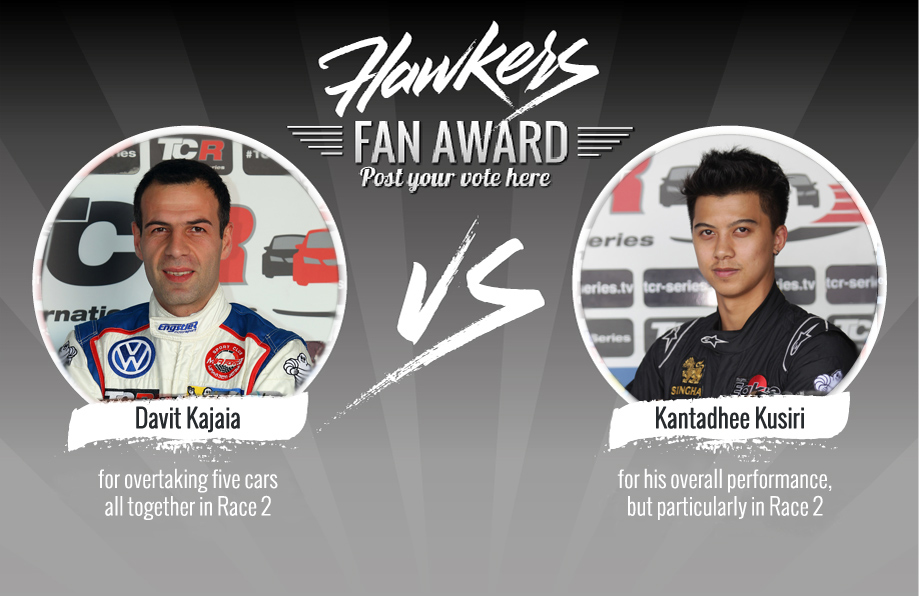 The ‘K Factor’ seemed to be the most spectacular during last weekend at Buriram’s Chang International Circuit. In fact, the nominees for the Hawkers Fan Award were Kantadhee Kusiri and Davit Kajaia.
Kusiri of Team Eakie BBR Kaiten made his first ever Touring Car appearance on his home country’s racetrack and was really impressive. Not only he qualified eighth overall, scored points in both races and claimed a double victory in the TCR Thailand. He was also able to fight on equal footing with the TCR International stars in a battle for the podium positions.
Liqui Moly Team Engstler’s Kajaia is not new to the nominations. In fact he won the Hawker Fan Award for his performance in the first race meeting of the season in Bahrain. This time he was nominated for a superb overtaking manoeuvre in the second race with which he passed five other drivers all together.

The motivations for their nominations are:
- Davit Kajaia: for overtaking five cars all together in Race 2
- Kantadhee Kusiri: for his overall performance, but particularly in Race 2

Voting is possible until midnight of Tuesday, August 30. The final results will be shown on the website on the following day.