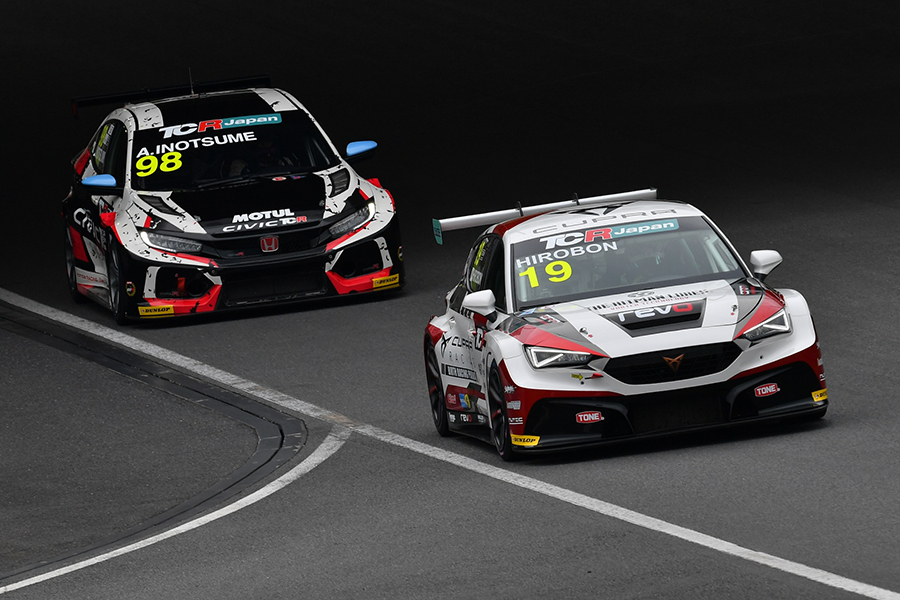 ‘Hirobon’ returned to victory in TCR Japan, as he drove his Birth Racing Project CUPRA Leon Competición to a couple of victories at Twin Ring Motegi. In both races the reigning champion subdued Anna Inotsume’s dogged resistance and so extended his leadership in the standings; in the Saturday series ‘Hirobon’ is 22 points clear of Inotsume, while in the Sunday series he leads Masanobu Kato by 23.

Race 1 – In a close Qualifying, Kato had outpaced ‘Hirobon’ and Inotsume by 10 and 39 thousandths respectively. The top three kept their positions at the start, although newcomer Hideyoshi Nishizawa was able to briefly steal P3 from Inotsume. Kato pulled away, while Inotsume put the pressure on ‘Hirobon’, but she was unable to attempt an overtaking move and eventually lost contact. In the final part of the race, ‘Hirobon’ closed the gap from the leader who was in trouble with the tyres and made a mistake at the end of lap 10, which gave ‘Hirobon’ the opportunity to take the lead ahead of Inotsume. They finished 1-2, with Nishizawa third, while Kato dropped down to 8th.

Race 2 – Inotsume sat on pole and led at the start from ‘Hirobon’, Kato and Kenji Suzuki, while ‘Mototino’ ran wide at T1 and dropped a couple of places to sixth. Inotsume tried to pull away, but ‘Hirobon’ was able to follow her closely at striking distance. In lap 6, Resshu Shioya went off while trying to defend his fifth position from the assaults of ‘Mototino’ and Nishizawa; the marshals were quick in recovering Shioya’s Honda from the gravel trap. From lap 9, ‘Hirobon’ increased the pressure, attempting overtaking manoeuvres at every corner and at the beginning of lap 10 the two cars ran abreast until ‘Hirobon’ took the lead and went to score his fifth victory of the season, beating Inotsume to the line by 2.2 seconds. Kato finished a distant third and Suzuki kept ‘Mototino’ at bay, but was then demoted to sixth by a 5-second penalty.

The penultimate race meeting of TCR Japan will be at Fuji, 9/11 September.