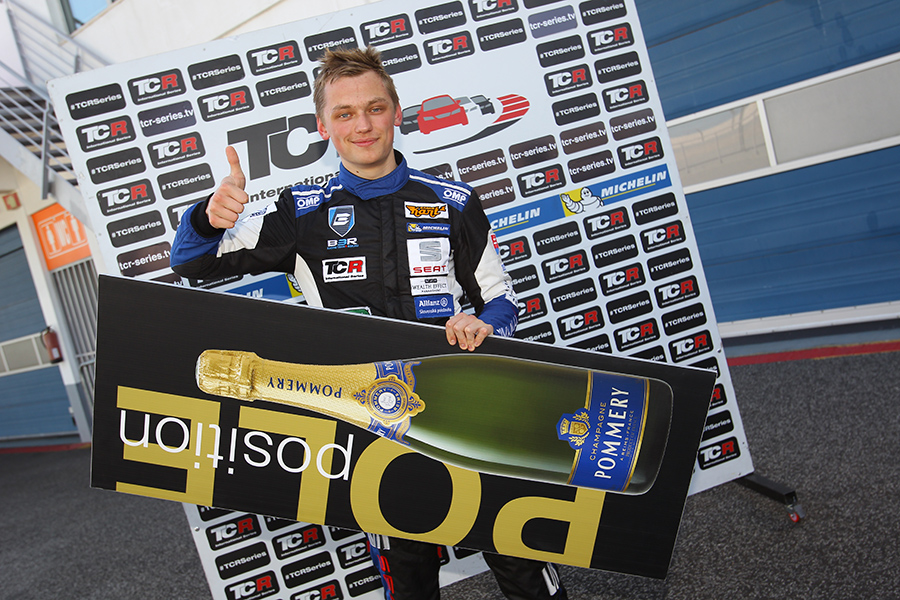 Homola on pole after breathtaking qualifying

Mat’o Homola and B3 Racing Team won their first pole position on their second appearance in the TCR International Series.
Once again it was a very close session, with the ninth fastest drivers covered by only six tenth and three different brands – SEAT, Honda and Volkswagen – filling the top-three positions within three tenths.
The young Slovak and his SEAT edged out the rest of the field with an impressive lap of 1:48.518 that was posted on their first run in Q2. Gianni Morbidelli placed his WestCoast Racing Honda in second position, only 0.155 seconds behind the poleman (1:48.673).
The Leopard Racing duo of Jean-Karl Vernay and Stefano Comini fought for the third position until the very end; eventually the Frenchman’s 1:48.860 beat the reigning champion’s 1:48.965 by one tenth.
After topping the time sheet in Q1, Pepe Oriola qualified in a disappointing seventh position, while Loris Hezemans was classified tenth and won pole position on the reverse grid for the second race.
The first race will start tomorrow at 11:25 local time on the distance of 15 laps, with the green light for the second race at 17.05.

Qualifying 1: One lap is enough for Oriola
It took only one lap to Pepe Oriola for posting the fastest lap at the beginning of the session. His time of 1:49.231 was nearly two tenths faster that everybody else’s.
Jean-Karl Vernay (1:49.424) climbed to second fastest in the latest moments, demoting Mat’o Homola (1:49.479) to third. After aborting one attempt due to a mistake, Gianni Morbidelli salvaged the situation with a last lap of 1:49.508 that placed him in fourth, ahead of Stefano Comini and James Nash.
The leg was disrupted by the red flag after only four minutes, when Dušan Borković lost his car and hit the barrier head-on at Turn 3.
The following drivers advanced to Q2: Oriola, Vernay, Homola, Morbidelli, Comini, Nash, Afanasyev, Gleason, Pellinen, Hezemans, Kajaia and Tassi.
They were all covered by only nine tenths of a second.

Qualifying 2: SEAT beats Honda and Volkswagen
Mat’o Homola’s SEAT set an impressive fastest lap of 1:48.518 that was good enough for claiming pole position.
The other drivers did their best and improved their times, but not enough. Gianni Morbidelli managed to post the second best lap (1:48.673), while Jean-Karl Vernay (1:48.860) beat his teammate Stefano Comini (1:48.965) for third.