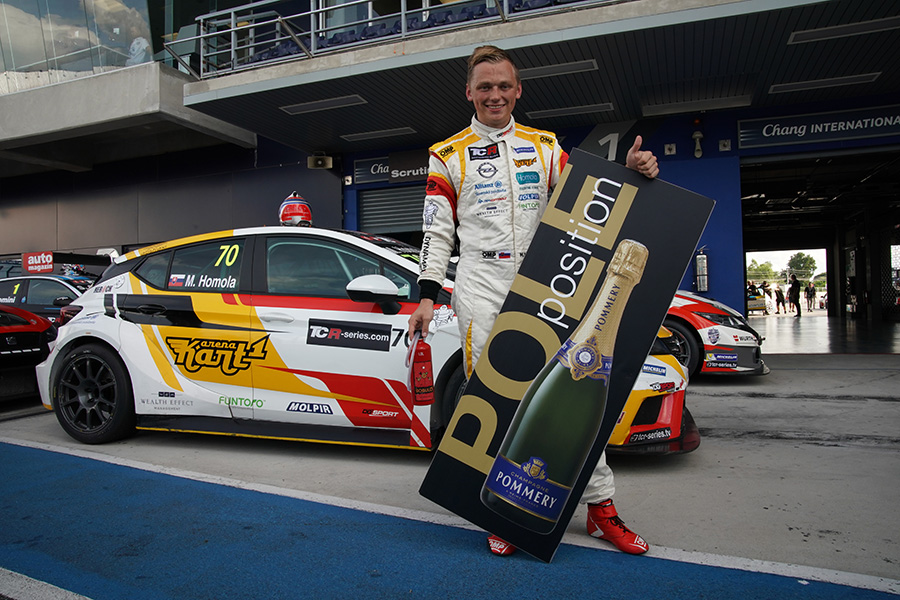 Homola places Opel back on pole

Mat’o Homola claimed his third pole position of the season, after those in Bahrain and Austria, at the wheel of his DG Sport Compétition Opel Astra car. The young Slovak topped the timesheet at the end of one of the most thrilling Qualifying sessions ever, that saw many position changes, penalties, red flags and breakdowns.
Eventually, Homola’s fastest lap in Q2 was quicker than James Nash’s by a mere four thousandths of a second, while Norbert Michelisz managed to qualify in third ahead of Jean-Karl Vernay, meaning four different brands – Opel, SEAT, Honda and Volkswagen – fill the first two rows of the grid for tomorrow’s Race 1. Attila Tassi, Vernay’s closest competitor in the title fight, qualified in fifth position.
The GE Force Alfa Romeo team suffered the greatest disappointment, as both the team’s drivers - Dušan Borković and Davit Kajaia – were eliminated despite being among the fastest. The Serbian broke his suspension after posting a provisional fastest lap in Q1 and was then not admitted to Q2 for receiving external aid, while his teammate blew the engine at the beginning of Q2.
Local hero Kantadhee Kusiri managed to qualify a brilliant eighth, while Aurélien Panis qualified tenth and won pole position on the reverse grid for Race 2 alongside Stefano Comini. Panis will start from the back of the grid in Race 1 due to an engine change.
The first race will start tomorrow at 14:30 local time (live streaming at www.tcr-series.com and www.tcr-series.tv).

Qualifying 1: Michelisz beats Homola by three tenths
It was a frantic start to the session, as very fast laps were clocked straight away. After Nash’s 1:44.121, Kajaia and Borković improved to 1:43.820 and 1:43.631 respectively. However, immediately afterwards the Serbian broke the front suspension after hitting a pile of tyres, stopping on the track and so prompting the red flag. Just before the session was suspended, Vernay (1:43.731) and Nash (1:43.971) had moved up to second and fourth.
The session resumed with 13 minutes still on the clock and immediately Oriola posted a new provisional fastest lap of 1:43.478 that was bettered by Vernay’s 1:43.456. As all competitors were eager to improve, Race Control began to disallow times due to disrespect of track limits.
Vernay improved further to 1:43.447, but with three minutes left, Michelisz stopped the clock at 1:43.315, towing Tassi to set the second fastest lap of 1:43.365. Eventually the young Hungarian was demoted to third when Homola moved up to second with a lap of 1:43.350.
Despite setting the 7th fastest lap, Borković was not allowed to run in Q2 because his car had been towed back to the pits after the incident, which promoted Morbidelli to tenth.
The following drivers went through to Q2: Michelisz, Homola, Tassi, Vernay, Oriola, Altoè, Nash, Kajaia, Panis, Comini, Kusiri and Morbidelli.
Among those who failed to make the cut were Huff, Lloyd and Vervisch.
Chariya Nuya set the pole in TCR Thailand, beating Morin Racing’s lady driver Nattanid Leewattanavaragul.

Qualifying 2: Homola sets pole by four thousandths
The second part of the session began just like the first. Michelisz (1:43.359), Tassi (1:43.322), Nash (1:43.314) and Kajaia (1:43.078) clocked consecutive provisional fastest laps. However, Kajaia’s, Michelisz’s and Tassi’s times were disallowed for infringing track limits. A similar penalty was imposed to Vernay and Oriola.
Homola set a new provisional fastest lap of 1:43.093 just before the session was disrupted by the red flag when Kajaia’s car stopped on the track with a smoking engine.
When the session resumed only three minutes were left, meaning that drivers had only one attempt to improve. Michelisz moved up into provisional second place (1:43.228), but Nash did better (1:43.097), failing to steal pole position from Homola by four thousandths.