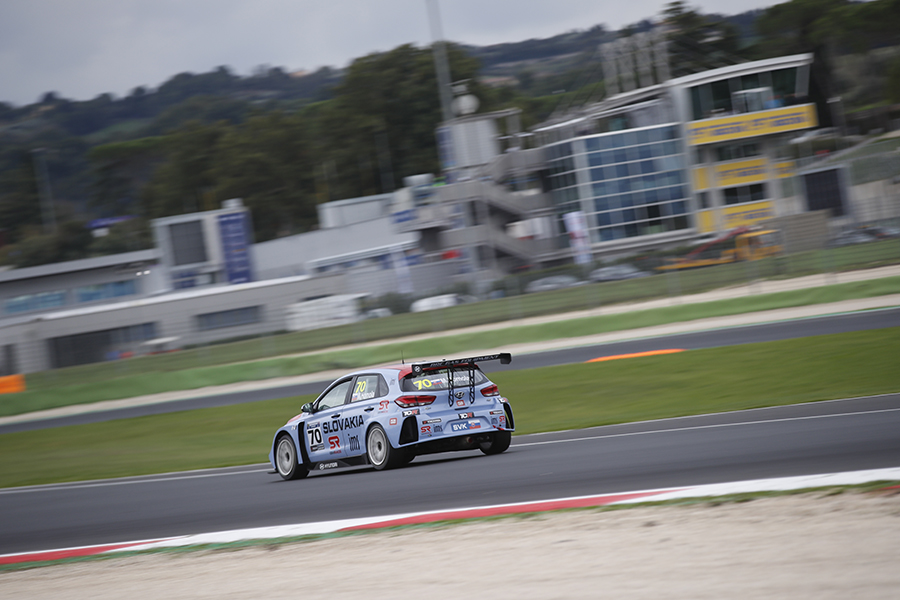 Homola tops the second practice before the red flag

The second Free Practice for the Touring Car Cup at Vallelunga was cut short by a red flag with two minutes to go, which left Mat’o Homola on top of the timesheet with a lap of 1:40.692.
The Slovak driver had opened hostilities setting a provisional fastest lap of 1:41.446 that was bettered halfway through the 30-minute session by John Filippi’s 1:41.342 and then Tom Coronel’s 1:40.892.
Many drivers improved in the second part of the practice: Gilles Magnus (1:40.944) advanced to third place, Filippi (1:41.217) retained the fourth position, Jessica Bäckman (1:41.252) moved into fifth and Faine Kahia (1:41.441) completed the top six.
However, the last minutes were due to bring further improvements as Magnus, Luca Engstler and Klim Gavrilov set very quick times in the first sector, but they all saw their efforts spoiled when Dušan Kouřil’s Hyundai lost a wheel at T7 forcing Race Control to red-flag the session that, with a bit more than two minutes left, was not resumed.
The red flag had been waved a first time after ten minutes, when Salem Alnusif had gone off at T10 in the Team Kuwait Audi RS 3 LMS.
Cars of four different brands were classified in the first four places: Hyundai, Honda, Audi and CUPRA
Engstler, Kouřil, Gavrilov and Gonzalo De Andrés (Peugeot) filled the positions between seventh and tenth, while Norbert Kiss (Alfa Romeo) and Julius Adomavičius (Volkswagen) were 11th and 15th fastest respectively. The two MG cars were still down the order in 17th (Rory Butcher) and 18th (Zhang Zhen Dong) positions; behind them there were only the Audi DSG of Valters Zviedris and the Audi SEQ of Alnusif that did not rejoin after the incident.
Action will resume tomorrow morning at 8:30 local time (CET) with Qualifying for Race 1; the session will be streamed live at www.tcr-series.com and www.tcr-series.tv.