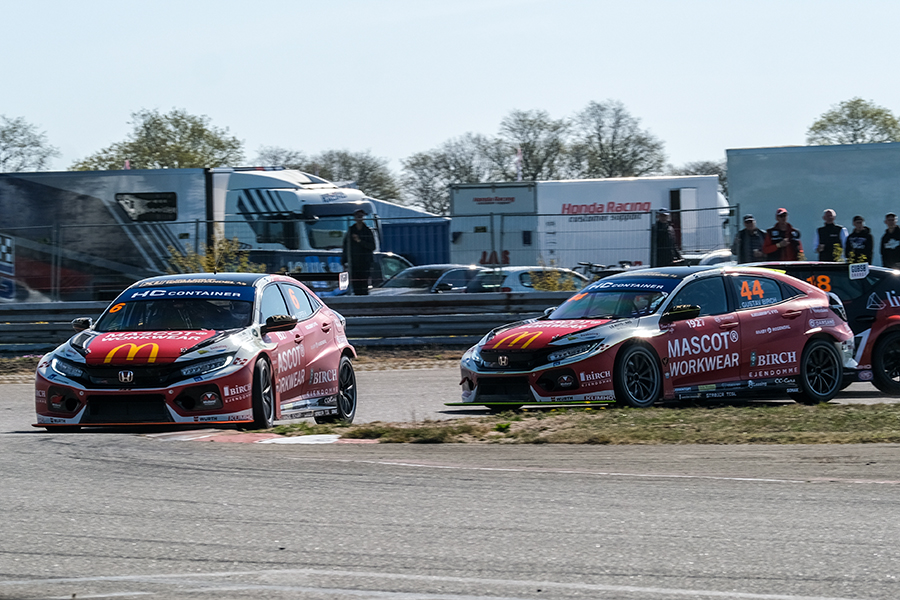 
At the opening event of the 2022 TCR Denmark at Padborg Park, the Honda Civic cars made a clean sweep as the defending champion Kasper H. Jensen won twice and his teammate Gustav Birch took his maiden win. Jensen leads the standings, eight points clear of Birch.

Actually, the third race saw Mike Halder taking the chequered flag in first position, but he was then dropped by a penalty.

In Race 1, pole-sitter Jensen made a good start from Birch and the pair ran in first and second places for the majority of the race. Halder started from P3 but was caught up in the pack off the start line, emerging in fourth place behind the CUPRA of Michael Markussen. They battled for much of the race, but Halder couldn’t quite get close enough to make an overtaking move. Much of the race was fairly processional, until Birch slowed on the penultimate lap, dropping to P6 and then finishing the race in ninth place. Jensen took a comfortable lights-to-flag victory from Markussen and Halder.

The reversed-grid Race 2 Jensen’s GMB Motorsport teammate Birch take the win after starting from second on the grid. His Honda passed the Alfa Romeo of pole-sitter Kristian Moe Sætheren on the opening lap and was then never threatened. The drive of the race, though, came from Halder who started from P8 but steadily carved his way through the field to finish second, while the final podium place went to Jacob Mathiassen in another of the Insight Racing Alfa Romeo Giulietta cars. Jensen finished sixth after starting from P10.

Jensen was on pole for Race 3, with Halder alongside. They led the field, with Birch third and Nicolai Sylvest who passed Mathiassen for fourth. Kenn Bach’s CUPRA was punted into a spin at the start and crashed into the pit wall, which prompted the safety car on track. As the race restarted in lap 7, Halder overtook Jensen for the lead. The top positions froze for the rest of the race, with Birch and Sylvest comfortably holding on to third and fourth positions. Behind them, Mathiassen finished fifth, rejecting the assaults from Povlsen.

After the race, Halder was handed a thirty-second penalty for passing Jensen under yellow flag and dropped to tenth, while Jensen, Birch and Sylvest were promoted to first, second and third.

The championship will return into action at Djursland, on 3/5 June.