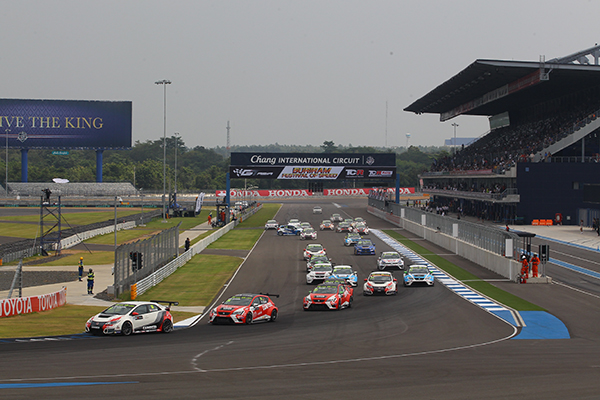 2012 FIA WTCC champion Rob Huff and 2013 FIA WTCC Independent Champion James Nash are the guest stars in a field of 30 cars that sets a new record for participation in the inaugural season of the TCR International Series.
Huff, who has already scored seven race wins in the Macau Guia Race, will be at the wheel of a WestCoast Racing Honda Civic, while Nash makes his touring car comeback in a Ford Focus run jointly by Proteam Racing and FRD Ford HK Racing Team.
“Macau is the most challenging racetrack I’ve ever raced on and my record is strong there. I’m really pleased to have been invited to drive in the TCR International Series finale there and I am confident we will have a competitive package for this unique event,”said Huff.
"I've been watching TCR develop over its maiden season and the success is amazing. Joining the championship with the Ford team is a great opportunity and racing at Macau is always special. I can't wait to have my first few laps in a TCR car," said Nash.

Huff and Nash join another touring car superstar, Alain Menu who will once again be driving the Top Run Subaru after his TCR debut in Thailand.
The Macau finale will also feature a few important comebacks to the series: Andrea Belicchi, the winner of Race 2 in Shanghai, returns to Target Competition after missing the events in Singapore and Thailand; the Italian outfit has entered an impressive six-car line-up that includes Jordi Oriola (who made a couple of appearances earlier in the season) and Francisco Mora (who scored points in both his home races at Algarve).
The latest additions to the entry list were young Britons Josh Files and Dan Wells who will drive the Campos Racing Opel Astra cars.
The drivers represent 12 different nationalities, with seven Hong Kongers forming the largest contingent.