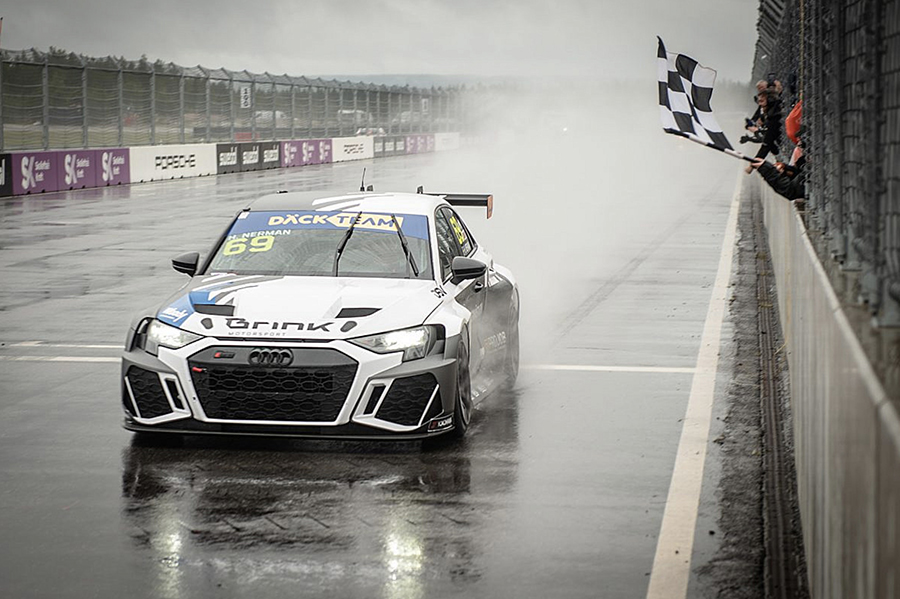 Hugo Nerman took two wins in a row in TCR Scandinavia at Skellefteå, while Robert Dahlgren won the final race.

Andreas Bäckman qualified on pole, but on race day the circuit was under continuous rainfall. Bäckman was passed at the start of  Race 1 by Nerman, while Dahlgren made progress from sixth on the grid to third. Just behind there was carnage, as the CUPRA of Dahlgren’s teammate Axel Bengtsson, the Audi of Calle Bergman, and the Volkswagen of Dennis Strandberg made contact. Bergman spun off into the Honda of Didrik Esbjug, with Strandberg slamming into the barriers and all three cars were out.

The race resumed after a safety car period, with Dahlgren passing Bäckman for second. It was then confirmed that Nerman would be hit with a 20-second penalty for false start, so when Nerman went on to win, Dahlgren was effectively classed as the winner. However, a protest from Nerman’s Brink Motorsport team had the decision overturned after the race.

By Race 2, the rain intensity had increased. Mattias Andersson started from pole ahead of Bäckman and the race started behind the safety car. Bergman was quickly passed by Oliver Söderström for P3 before he was knocked into a spin by Dahlgren and retired, with the safety car called again. When the race resumed, Bäckman made contact with Andersson; this allowed Bengtsson and Nerman through to first and second. Then Bengtsson went wide, allowing Nerman to take the lead ahead of Söderström and Andersson, who then passed Söderström for P2. Dahlgren passed Bäckman for fifth before overtaking his teammate Bengtsson. Nerman won ahead of Andersson and Söderström, while Dahlgren was given a five-second penalty for unfair driving, which sent him down to seventh. The penalty also gave him a front row slot for the reversed grid third race.

Isac Aronsson started the final race from pole ahead of Dahlgren and Tobias Brink. Dahlgren jumped straight into the lead, and then led the rest of the race unchallenged, while Brink and Bäckman made their way past Aronsson who continued to drop down the order. Bäckman slowed out of third place with two laps to go, promoting team-mate Söderström to the final podium position. Dahlgren won by over five seconds ahead of Brink and Söderström and re-took the points lead from Nerman. He leads the championship with 71 points, five clear of Nerman.

The next round of TCR Scandinavia takes place at Ring Knutstorp on July 22/23.