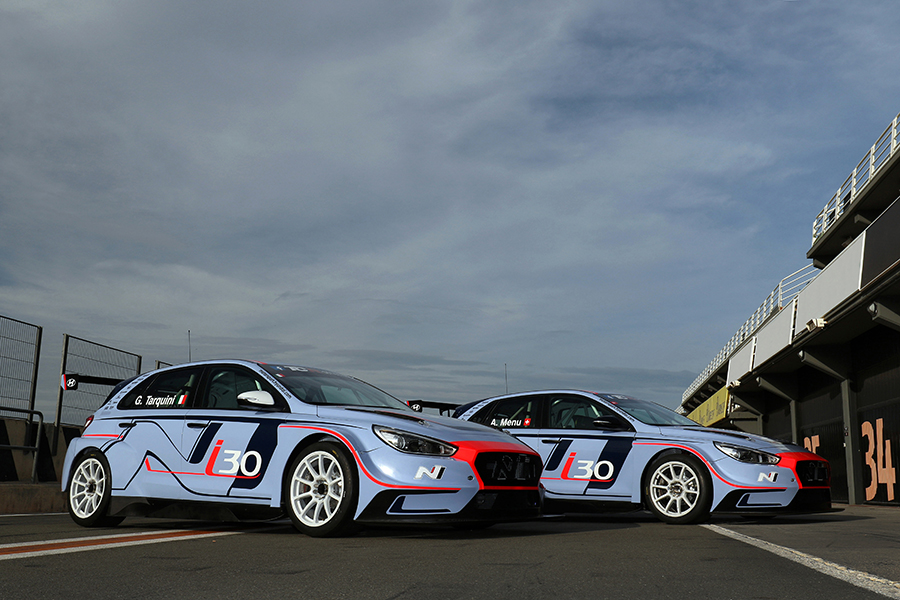 The Hyundai i30 N TCR will enter both remaining rounds of the 2017 TCR International Series season, starting with the one at Zhejiang Circuit in China.
Two cars will be run by BRC Racing, Hyundai Motorsport’s development partner on the i30 N TCR, for Gabriele Tarquini and Alain Menu. The team intends to use the experience gained from the race weekends to finalise the set-up for the car ahead of the first chassis being produced for customers.
Tarquini, the lead test driver for the project, will continue his work at the wheel of the i30 N TCR as one of the drivers for both of the TCR International Series events. Throughout the testing phase the former World Touring Car champion’s expertise has proved invaluable in helping the team during the development phase. The second car will be driven by Alain Menu who brings further experience to the team, adding to considerable expertise of his new teammate. The additional input from a second, very experienced driver, will help the team continue to improve the set-up of the car through the final part of the year as Hyundai Motorsport’s attention turns to delivering completed chassis to customers, starting in early December.
Both drivers completed a two-day test last week in Valencia, conducting final preparations on the new chassis they will drive in China. Both i30 N TCR cars sported the race colour scheme that brings together the N logo and Hyundai Motorsport’s traditional colours.

Hyundai Motorsport Team Principal Michel Nandan said: “The debut in the TCR International Series is a big moment for the project. Coming in China, alongside the TCR Asia and TCR China series, the weekend is the ideal event to show the potential of the i30 N TCR to teams and drivers. The look of the cars ties the i30 N TCR very closely to the N line-up of road models, so a strong performance would promote both the racecar and the standard models”

Hyundai Motorsport Customer Racing Manager Andrea Adamo said: “Bringing the i30 N TCR to the TCR International Series for the final events of the season is a very important moment for all of Hyundai Motorsport Customer Racing. The weekend in China comes at a crucial time of the year, as teams and drivers are now planning their campaigns for the 2018 season. To be able to show the performance of the i30 N TCR at the highest level is a big opportunity for us. However, the races also give us the chance to continue our development work.”