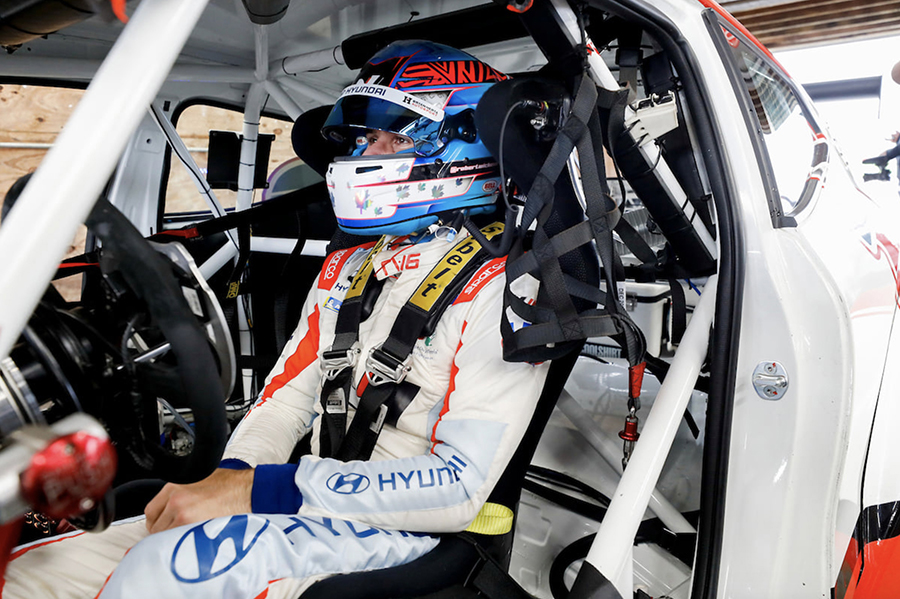 In a TCR car, Robert Wickens is a racing driver once again

Today at Mid-Ohio, Robert Wickens has completed his maiden test in a TCR car, a Hyundai Veloster N of the Bryan Herta Autosport team.
It was a very special test, because in 2018, Wickens’ IndyCar rookie season was cut short by a horrifying crash at Pocono Raceway that left him with a thoracic spinal fracture, a fractured neck, tibia and fibula fractures to both legs, fractures in both hands, a fractured right forearm, fractured elbow, a concussion and four fractured ribs. The young Canadian also suffered a bruised spine that made it doubtful he would ever walk again, let alone drive a race car.
Yet today, after 20 months of up to six often-agonizing hours of daily rehabilitation, Wickens strapped into the Veloster N TCR campaigned by Michael Johnson in the IMSA Michelin Pilot Challenge, that is not and average Hyundai Veloster N TCR.
The car is equipped with a hand-controlled throttle, brake and clutch for Johnson, a former national motorcycle champion who was paralyzed from the mid-chest down some years ago and subsequently began racing sports cars. He scored a historic IMSA TCR win at Lime Rock Park three years ago and, along with co-driver Stephen Simpson, earned a top-three finish at Daytona in January.
Johnson operates throttle and brake via metal rings mounted behind and in front of the steering wheel, while the clutch is what looks like a standard emergency brake to the right of the seat. He changes gears with paddle shifts.

“Once I was taken out of my medically-induced coma, ‘When can I race again?’ was definitely on my short list of questions,” Wickens said. “This injury has been just a setback, not necessarily a career ender. At 32, I have so much more of my life to live and I intend to live it to its fullest. That’s what really drove me in my rehab phase.”

But for the generosity of Herta, Hyundai and Johnson, Wickens might still be in the what-if stage of his goal of getting back behind the wheel of a race car.
After Simpson took the Hyundai for a system check and bed the brakes, Wickens climbed into the car and headed out onto a racetrack for the first time in 21 months. After completing a tentative first lap, Wickens carried a little more speed consistently. After a dozen laps, he pulled into the pits, drove into the garage and got out of the car.

“The car’s still in one piece,” he smiled. “But it felt good. There’s a lot going on: first time with hand controls, first time with this car and on a damp track. It gave me a much greater appreciation for what Michael Johnson has been able to achieve. I tried not to be a hero, hard as that was! But it felt good to be back in a race car.”