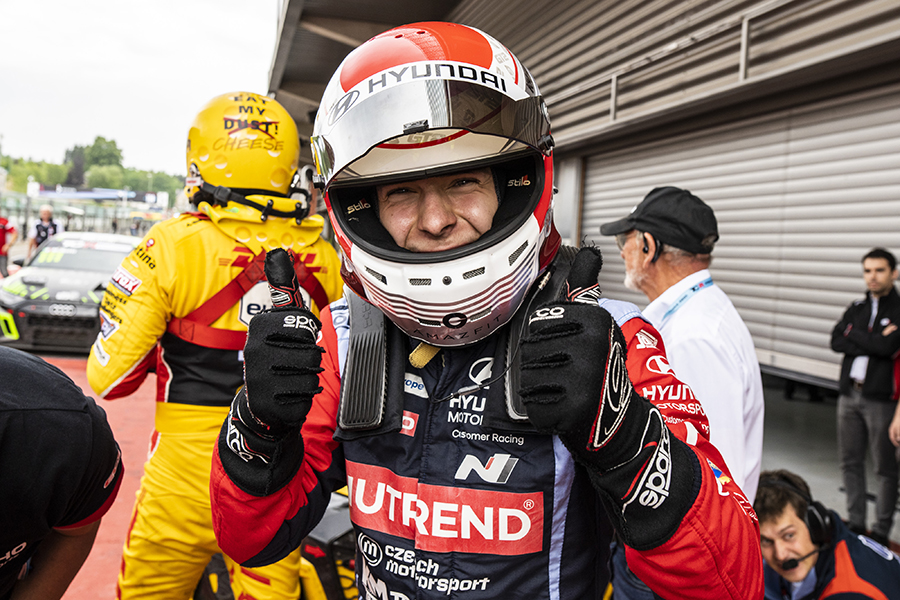 Jáchym Galáš imitated Isidro Callejas who claimed his maiden TCR Europe victory yesterday at Spa-Francorchamps. The 20-year-old Czech accomplished the same feat today in Race 2 and led home his teammate Mat’o Homola in a Janík Motorsport 1-2, while Tom Coronel completed the podium. The result means Galáš is the sixth race winner from the six races held so far.

Galáš made a good start from pole position and led from Homola with Coronel having dropped a place after starting from P2. Halfway through the opening lap, Josh Files lost P4 to a charging Franco Girolami, who’d started from tenth on the grid. On Lap 2, Jack Young attacked Files, but at the same time he was defending the sixth place from Callejas.

Despite the battles raging inside the top ten, the remainder of the eight-lap race was mostly uneventful. Callejas made repeated attempts to pass Young who successfully defended the position; Files was steadily catching Girolami but going into the final lap the Audi was still ahead of the Hyundai.

At the start of the last lap, there was last-minute drama when Giacomo Ghermandi attempted a move up the inside of Viktor Davidovski going into La Source; the pair made contact and while Ghermandi was able to limp to the finish, Davidovski’s race was over.

Galáš and Homola sprinted for the chequered flag to record a 1-2 finish for Janík Motorsport, with Coronel third. Behind them, Files made a last-gasp attempt to pass Girolami in the dash for the finish line, but Girolami held on to finish in fourth place by one-tenth of a second.

In the Drivers’ standings, the weekend’s results mean Girolami now has a 31-point advantage over Coronel with Gavrilov in third place, a further twenty-one points behind.

TCR Europe will return into action at the Norisring, on July 1/3.