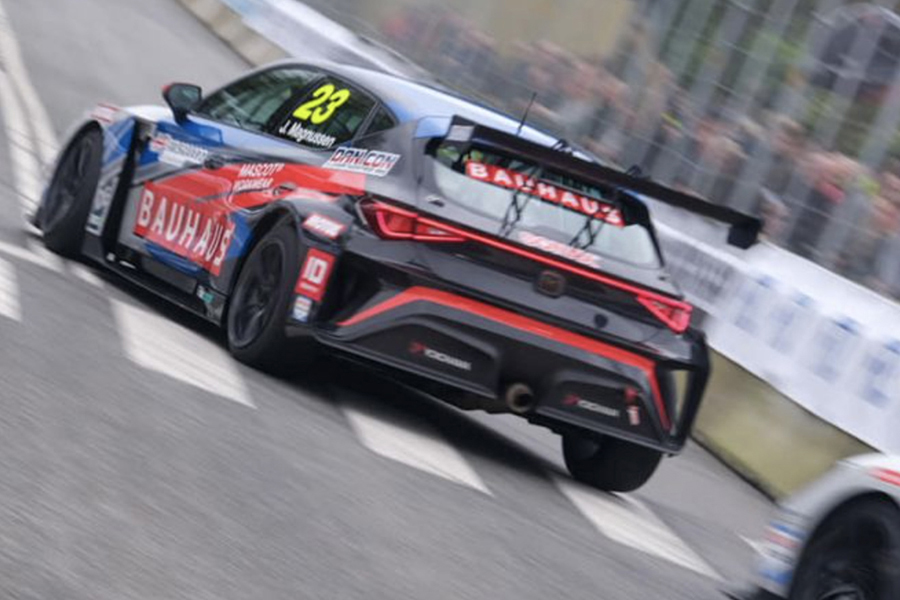 Jan Magnussen took a lights-to-flag victory in the first race of the TCR Denmark series around the Aarhus street circuit, winning in his LM Racing CUPRA by ten seconds over points leader Kasper H. Jensen’s Massive Motorsport Honda.
Magnussen started from pole position ahead of teammate Nicolai Sylvest, and the two got away well ahead of Jensen’s Honda, while Michael Markussen was able to get the jump in his Peugeot on Casper Elgaard to move up to fourth.
Further down the field, Allan Kristensen was rammed by another car and retired, while Kin Lund too stopped with a flat tyre. In lap 2, a gearbox issue eliminated Louise Frost’s Honda Civic and one lap later the race lost one of the top drivers as Jacob Mathiassen retired from fourth, his Alfa Romeo Giulietta suffering from a turbo pressure issue.
As Magnussen pulled away, teammate Sylvest ran into trouble with a punctured tyre on lap nine and lost one lap in the pit, and so Jensen took over second place ahead of Markussen.
Magnussen continued to pull away, winning the race by 9.58 seconds over Jensen, with Markussen completing the podium.
Jensen now extended his championship lead over Elgaard to ten points, while Markussen moved up into third and Magnussen is tied in fourth with teammate Sylvest.
The second race of the weekend takes place at 11:00 CEST on Sunday, with Kenn Bach’s Honda Civic on the pole of the top-six reversed grid.