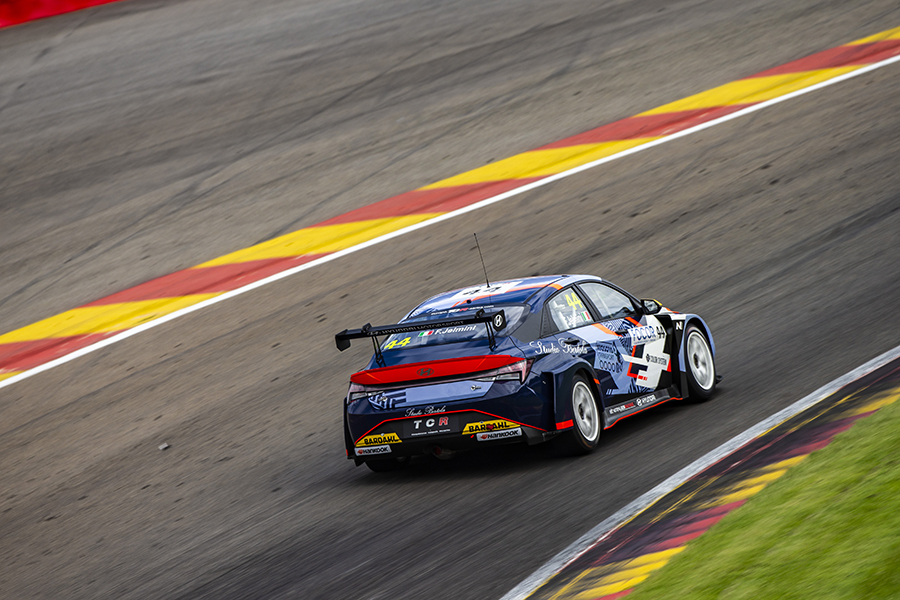 The Sébastien Loeb Racing Hyundai Elantra N of Felice Jelmini was fastest in the two-stage Qualifying session of TCR Europe at Spa, with the Italian driver ending up a little over four-tenths of a second ahead of his teammate Mehdi Bennani. Completing an all-Hyundai top three was the Janík Motorsport i30 N of Mat’o Homola, a further two-tenths adrift.
In the first part of the session, there was early disappointment for Jack Young in the Brutal Fish Racing Honda Civic Type R. After going fastest in yesterday’s second Free Practice session, the Northern Irishman left the track on his out lap and made contact with the barriers. Although the car limped on, Young was forced to pull up at Blanchimont on his next lap and so will start both races from twentieth position on the grid. At around the same time, Martin Ryba half-spun off the track and the two incidents caused a brief Full Course Yellow period that thwarted a number of drivers who were on quick laps.
The first competitive lap times saw Ryba and Young’s teammate Isidro Callejas fastest with a lap of 2:31.388, with series points leader Franco Girolami (2:31.665) P2 and Nicolas Baert (2:32.047) P3. Jimmy Clairet’s Peugeot remained in the pits for the first six minutes or so of the twenty-minute Q1 and although the 308’s technical issue was solved Jimmy would be outside the top twelve and so wouldn’t go through to Q2.
With around nine minutes remaining, Jelmini went fastest with a lap of 2:31.178 but right at the end of Q1 both Mehdi Bennani (2:30.902) and Sami Taoufik (2:30.909) went quicker than the Italian to end the session with three Hyundai Elantra N cars in the top three places. Also going through to Q2 were Klim Gavrilov, Callejas, Teddy Clairet, Mikel Azcona, Homola, Girolami, Tom Coronel, Niels Langeveld and Baert.
The second stage was even more frantic than usual, thanks to the long lap at Spa-Francorchamps. Three of the Sébastien Loeb Elantra N cars headed out together to try and give each other an aerodynamic tow around the circuit, with Taoufik running ahead of Bennani and Langeveld. It seemed initially as though the tactic had worked perfectly, with Bennani going fastest with a lap time of 2:30.847 and Taoufik second quickest with a 2:31.153. Girolami was briefly P3 with a 2:31.285 and Callejas P4 (2:31.479) but Baert pipped them both with a time of 2:31.221. Bennani and Taoufik both improved their times on the next lap but Jelmini, running alone without the benefit of a tow, then set a stunning time of 2:30.152 to go fastest, with Homola then going P3 with a 2:30.765. After the chequered flag, Azcona went fourth quickest with a 2:30.852 and, while it appeared that Girolami was on a fast lap and set to ruin the Hyundai lockout of the top three, in the end the Argentine driver could only manage to set the seventh quickest time of 2:31.285. Tenth fastest was the Audi RS 3 LMS of Gavrilov and so the Russian driver will be on pole for tomorrow’s Race 2.
The first race will be streamed live today at www.tcr-series.com; 18:30 local time (CEST).