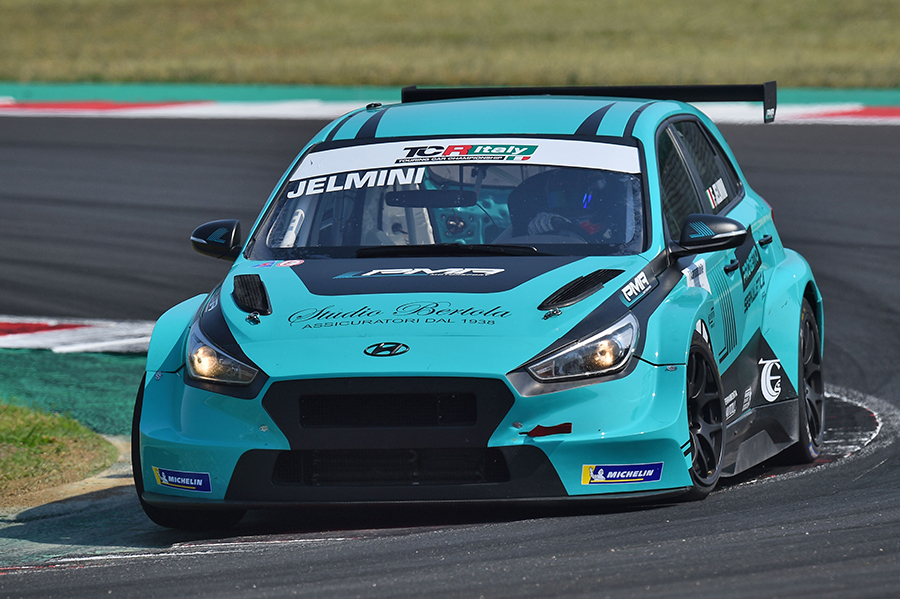 Felice Jelmini and his PMA Motorsport Hyundai i30 N set the pace in TCR Italy’s Qualifying at Misano. Jelmini topped the timesheet for most of the 25-minute session, first with a provisional fastest lap of 1:41.538 that he was then able to improve significantly to 1:43.136.
MM Motorsport’s Franco Girolami placed his Honda Civic Type R in second position; the Argentine’s fastest lap was four tenths slower than Jelmini’s. Marco Pellegrini moved into third position in the dying seconds of the session when his Target Competition Hyundai i30 N completed a lap in 1:41.706.
It was Girolami who posted the first provisional fastest laps of 1:42.953 and 1:42.633, but on his first lap out Jelmini moved the bar higher clocking a lap of 1:41.538; then he returned to the pits and watched his competitors trying to match his pace.
As the time went by, Pellegrini, Eric Brigliadori, Girolami, Salvatore Tavano and Mauro Guastamacchia consistently improved their times, closing the gap to Jelmini. Girolami moved into second (1:41.573), only 35 thousandths short of Jelmini’s time, Guastamacchia climbed to third (1:41.805) and Brigliadori to fourth (1:41.837).
And so, Jelmini decided to take to the track again and settled the matter with an impressive 1:41.136. Girolami tried to respond but went off at Turn 13 causing a full course yellow with four minutes left on the clock. The Argentine limped back to the pits and the green flag was waved 90 seconds before the end of the session, which was enough for Pellegrini to complete a lap of 1:41.706 that placed him third on the grid ahead of Guastamacchia, Brigliadori and Tavano.
Race 1 will start at 16:10 local time (CEST) and will be streamed live at www.tcr-series.com.