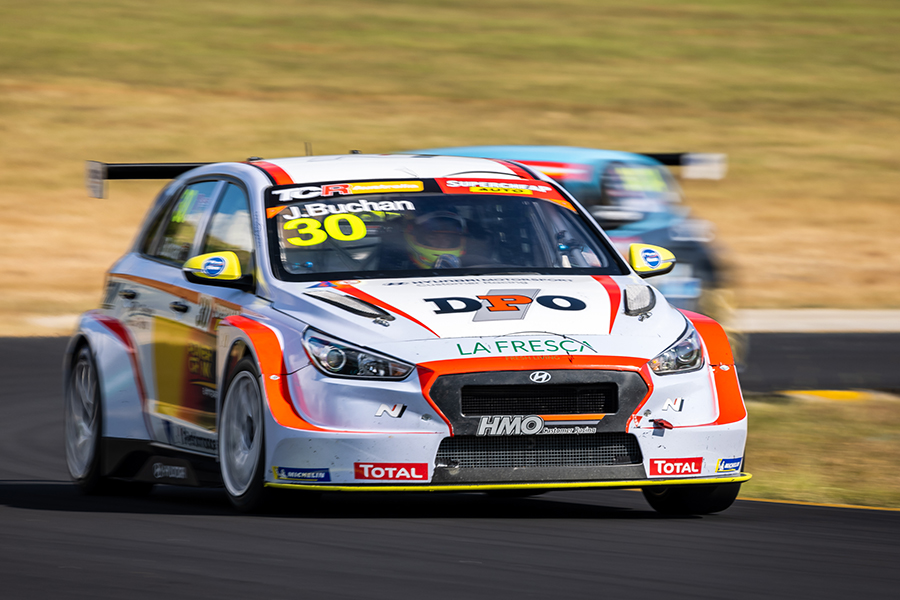 Josh Buchan encores with a second win in Sydney

Josh Buchan and his HMO Customer Racing Hyundai i30 N encored with a second victory in Race 2 of the TCR Australia event at Sydney Motorsport Park. Buchan led from the lights to the flag, leaving Chaz Mostert’s Audi RS 3 LMS a couple of seconds behind for the whole race, while Michael Caruso claimed his first podium result in the series, finishing third in his Garry Rogers Motorsport Alfa Romeo.
Caruso’s teammate Jordan Cox, who was seventh on the grid, pulled into the pits at the end of the warm-up lap with a technical issue and retired.
At the start, James Moffat’s Renault Mégane stalled from P2 and so Buchan could sprint from the pole to take the lead ahead of Mostart and Tony D’Alberto. Jay Hanson’s Alfa Romeo spun off during the first lap after making contact with John Martin’s Honda Civic and rejoined at the back of the field.
While Buchan was able to build a one-second margin ahead of Mostert, the battles behind became hot.
In lap 3, Caruso and Nathan Morcom moved into fourth and fifth respectively, passing Aaron Cameron whose Peugeot 308 lost pace and dropped to tenth behind the two Renault cars of Dylan O’Keeffe and Moffat, Luke King’s Audi and Lee Holdsworth’s Alfa Romeo. Two laps later, Cameron lost one more place to Ben Bargwanna.
In lap 8, Caruso and Morcom advanced further to third and fourth, overtaking D’Alberto who was also passed by Moffat and O’Keeffe who had swapped positions.
In lap 11, King and Holdsworth passed D’Alberto for P7 and P8; one lap later John Martin’s Honda, that had already been delayed after making contact with Hanson, spun off; Martin pitted and then rejoined three laps later.
Buchan took the chequered flag 2.1 seconds clear of Mostert who has further stretched his leadership in the standings to 93 points over Cameron and 110 over King.
Races 3 follows at 13:25 local time (05:25 CEST), with Buchan and Moffat sharing the front row once again; live streaming at www.tcr-series.com.