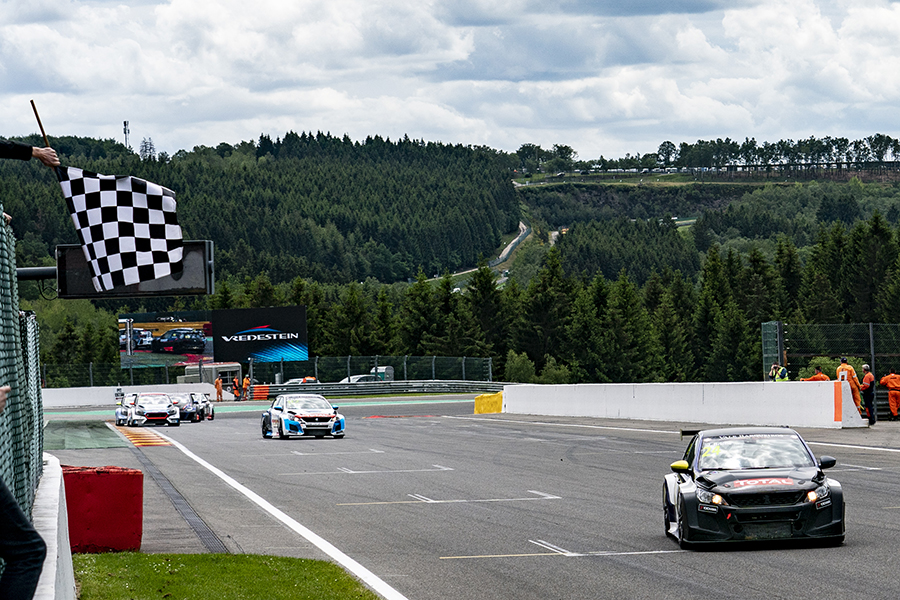 TCR Europe’s second race at Spa-Francorchamps turned into carnage, with no less than five incidents that are being investigated by the Stewards, plus a number of contacts and a couple of suspected jump-starts.
Eventually Julien Briché was the toughest guy on the track and scored a third consecutive Race 2 win that propelled him to the top of the standings. Jimmy Clairet finished second, claiming his first podium result in the series and completing a Peugeot 1-2. Mat’o Homola benefited from the battles that eliminated a few people in front of him to be classified third ahead of the charging Andreas Bäckman and Ashley Sutton.
At the start, Davit Kajaia stalled from second on the grid and Dušan Borković took the lead from the pole ahead of Jimmy Clairet, Homola, Briché, Aurélien Comte and Maxime Potty. During the first lap Dániel Nagy clashed with Olli Kangas and crashed; then it was Natan Bihel who crashed on the pit straight prompting the safety car into action.
When racing resumed, J. Clairet tried to overtake Borković, but went wide at the Source and dropped behind Briché. Soon afterwards, Briché overtook Borković who was hit by J. Clairet at the braking before the chicane and crashed.
Sutton and Comte clashed while fighting for fourth, Andreas Bäckman took the opportunity and passed them both.
During the penultimate lap, Tom Coronel and Stian Paulsen collided at the chicane and the latter spun off; Santiago Urrutia and Gilles Magnus made contact while fighting for eighth; Coronel was hit by Luca Filippi and crashed.
Eventually, Briché won from J. Clairet, Homola, A. Bäckman, Sutton, Comte and Urrutia
Many drivers paid for the fighting spirit that pervaded the whole field, though some of them had hit before being hit. Magnus, the winner of yesterday’s Race 1 who was leading the standings, retired after the contact with Urrutia.
Now, it’s all up to the Stewards…
The next event of TCR Europe will be at the Red Bull Ring in Austria, on July 12/14.