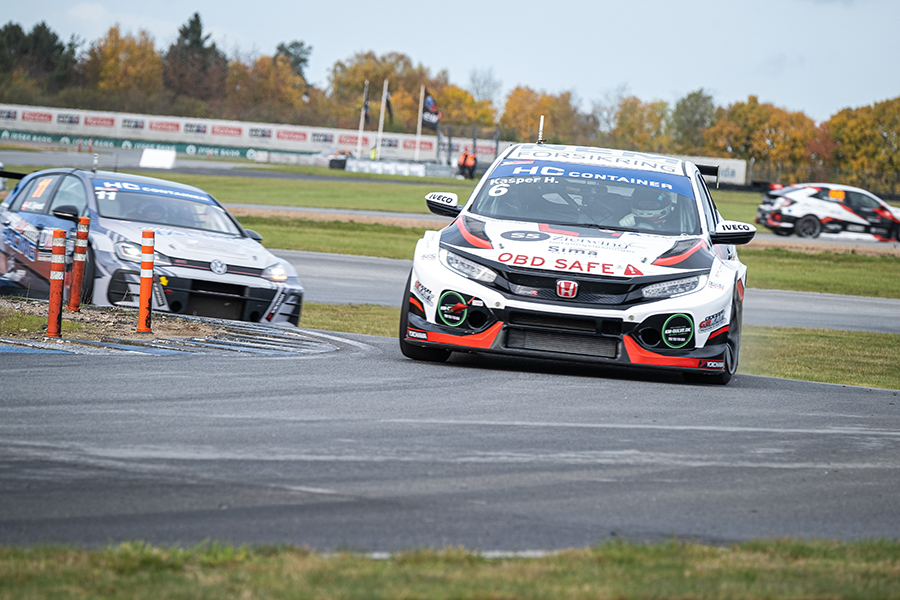 Kasper Jensen was crowned the first TCR Denmark champion. The Massive Motorsport driver secured the honours in style winning the first and the third races of the final event at Jyllandsringen at the wheel of his Honda Civic, and bringing to four his total harvest of victories during the season.
The final top-three of the standings did not change, with Martin Andersen finishing as runner-up and Nicolai Sylvest in third, while Jacob Mathiassen was the other race winner today, dominating Race 2 with the Insight Racing Alfa Romeo Giulietta.
Jensen started well the sunny autumn day, posting the pole position ahead of Sylvest, Jan Magnussen and Michael Markussen; Andersen, his main competitor in the title fight, qualified only seventh.
In the first race Sylvest challenged Jensen in the first corners, but unsuccessfully. From there on, Jensen controlled the events, although the gap remained small. Third in the initial phases was Markussen who had taken a great start, but later he conceded the last podium position to Magnussen. Things went immediately uphill for Andersen, as he suffered from a contact and dropped several positions. He then started to recover and eventually finished seventh, right behind the Alfa Romeo cars of Kristian Moe Sætheren and Mathiassen; this secured him the front row on the grid of Race 2, keeping his title chances alive.
Race 2 started with pole-sitter Michael Carlsen stalling, which created the inevitable confusion behind. Mathiassen, jumping from row 2, took the lead and pulled away. Nobody could threaten him, and he went on to take the second success of the season for the Alfa Romeo Giulietta. Behind him, the trio of Andersen, Markussen and Jensen kept busy with an intense fight; they were joined shortly after by Magnussen. Andersen kept second until the end, with Magnussen making it to the podium ahead of Jensen and Markussen. The fourth spot was enough for Jensen to secure the title. The race ended behind safety-car because of the contact between Kenn Bach and Jonas Lindhard, whose cars ended in the gravel and against the barriers.
In Race 3, Jensen kept the advantage of his pole position at the start, with Mathiassen gaining P2, but there were contacts at first corner between him, Magnussen, Andersen and Sætheren. Mathiassen dropped some places, Magnussen moved into P2, while Sylvest and Casper Elgaard benefitted from the incident for advancing to fourth and fifth. Elgaard eventually passed Sylvest for the third spot on the podium, with Andersen managing to climb back to P5.