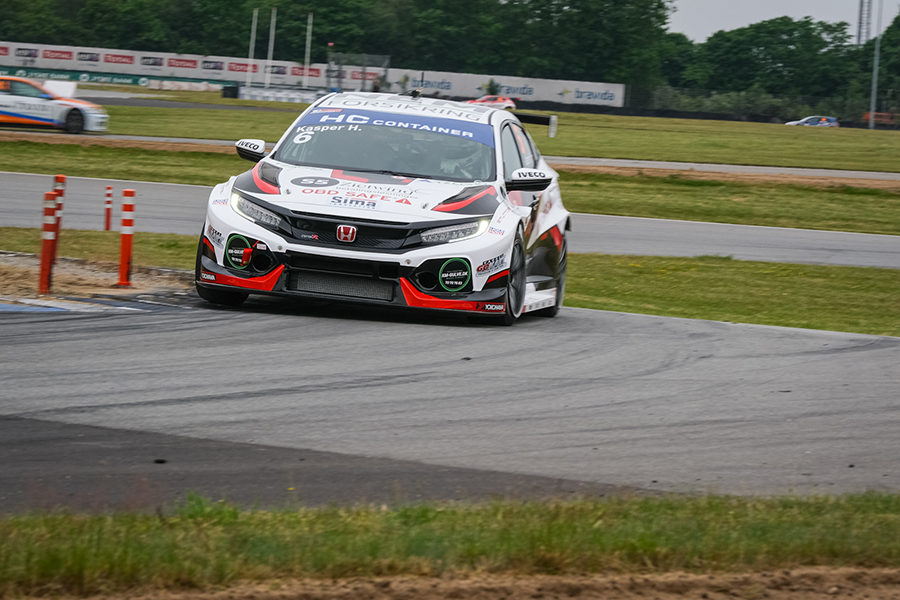 Massive Motorsport’s Kasper H. Jensen placed his Honda Civic Type R on pole position for the inaugural race of the new TCR Denmark championship.
Jensen confirmed himself as the fastest of the pack after clocking the best laps in the official pre-season test days and in this morning’s Free Practice sessions.
All 15 competitors began the 20-minute Qualifying with caution, as there were oil patches in some parts of the track, however, lap times became faster and faster as the session went on.
Jensen was the first to break the 1:11 wall, posting a provisional fastest lap of 1:10.360, but he soon was ousted by Martin Andersen’s 1:09.974. Jensen was quick to react and set two faster laps of 1:09.776 and 1:09.654 just before the chequered flag was waved, snatching pole position. Andersen dropped one more place when Nicolai Sylvest posted the second fastest lap of 1:09.805.
Behind the top three, Jan Magnussen and René Povlsen were placed fourth and fifth; after being fifth fastest in Free Practice, Jakob Mathiassen remained at the bottom of the timesheet, as he struggled with the set up of his Insight Racing Alfa Romeo Giulietta.
The series’ three inaugural races will take place tomorrow at 11:10, 15:55 and 16:45 (CEST) respectively, all on the distance of 15 minutes plus one lap. The grid for Race 1 is based on the Qualifying results; the top-eight classified in Race 1 will be reversed on the grid for Race 2, while the drivers will be placed on the grid for Race 3 according to the number of points scored in the two previous races.