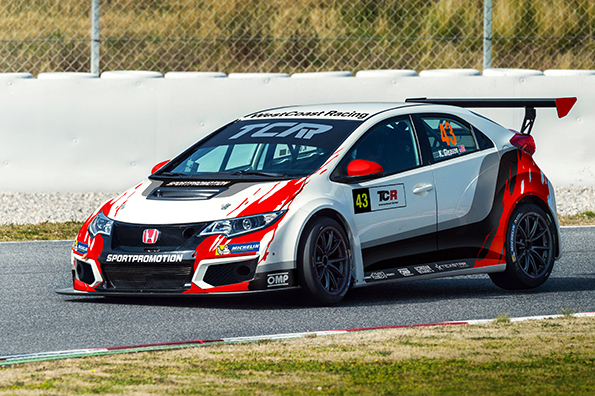 Westcoast Racing announced that American racer Kevin Gleason will form one third of its attack on the inaugural season of the TCR International Series.
Westcoast Racing was created in 1994 by Dick Jönsson-Wigroth and has gone on to establish itself as the world’s leading Swedish touring car team by accumulating several championship titles over the course of two decades in the highly esteemed Swedish Touring Car Championship.
Westcoast Racing will field a trio of Honda Civic cars built and developed to the new TCR technical regulations by JAS Motorsport.
With a background in US-based touring cars, Gleason has demonstrated skill and adaptability by seamlessly transitioning between different specifications of race cars and accumulating various high profile race victories along the way. His key achievements include a win in the 25 Hours of Thunderhill, the Continental Tire Sportscar Challenge VIR 13 Hour and the 2014 ADAC Nürburgring 6 Hours.

“I feel very fortunate to be a part of the Westcoast Racing team for the inaugural TCR International Series season,”said Gleason. “The team is well proven and brings a vast array of experience that I’m sure will help see it quickly adapt to the new challenge it faces in 2015. Beyond the team itself, I expect the Honda Civic TCR to be a competitive package, especially with the support of JAS Motorsport and Mugen. I look forward to building these relationships into a successful campaign.”

Westcoast Racing Team Manager, James Nixon, said: “Westcoast Racing is delighted to welcome Kevin Gleason to the team. His pace and hunger to succeed is very apparent and that was a big appeal when we started our conversations. The TCR International Series is the ideal category to start a full season campaign and to perfect his racecraft on some of the best tracks in the world. I have no doubt Kevin will soon be a name we all know and remember in touring cars.”