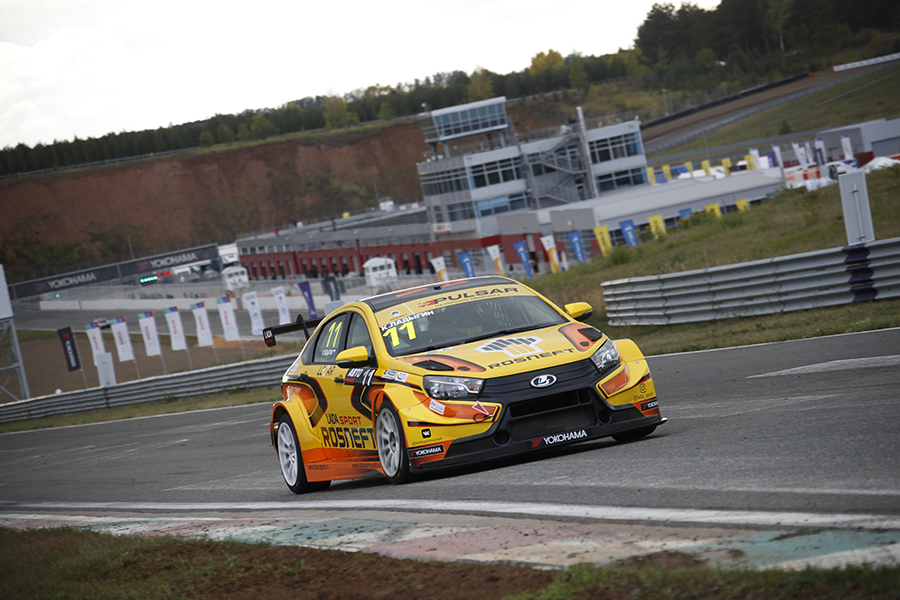 TCR Russia reigning champion Kirill Ladygin has scored a crucial victory in the attempt of defending his crown. The LADA Sport Rosneft driver recovered from a slow start and took the lead from Zakhar Slutskiy already during the first lap; for the remainder of the race he never relinquished the first place and, despite a safety car intervention, kept Slutskiy and his Carville Racing teammate Grigory Burlutskiy at bay until the end.
Ladygin had won pole position for Race 2 following the draw that reversed the first nine places in Qualifying. It was raining when the field dashed towards Turn 1 and Slutskiy had a better reflex from P2, leading the field from Ladygin and Burlutskiy. However, Ladygin was able to pass him during the opening lap.
In lap 2, Dmitry Bragin moved into P4, ahead of Pavel Kalmanovich; further behind, Mikhail Mityaev overtook Egor Orudzhev for P6 and Ivan Lukashevich passed Andrej Maslennikov for P9. Aidar Nuryev pitted for repairs after making contact with Timur Shigabutdinov.
When a car of the Superproduction class spun off, the safety car was deployed until the end of lap 4. As racing resumed, Ladygin rejected the attack from Slutsky and built a small gap. The rest of the race was pretty processional, and positions remained frozen. Ladygin won by 1.2 seconds over Skutskiy, while Burlutskiy completed the podium.
After the race, however, Slutskiy was given a ten-second penalty for a grid infringement that dropped him to sixth and promoted Burlutskiy and Bragin to second and third respectively.
Ladygin’s lead in the standings has grown up to 44 points over Bragin, while Lukashevich and Slutskiy follow, three and four points behind Bragin respectively.
The championship will resume on October 8/9 at Fort Grozniy.