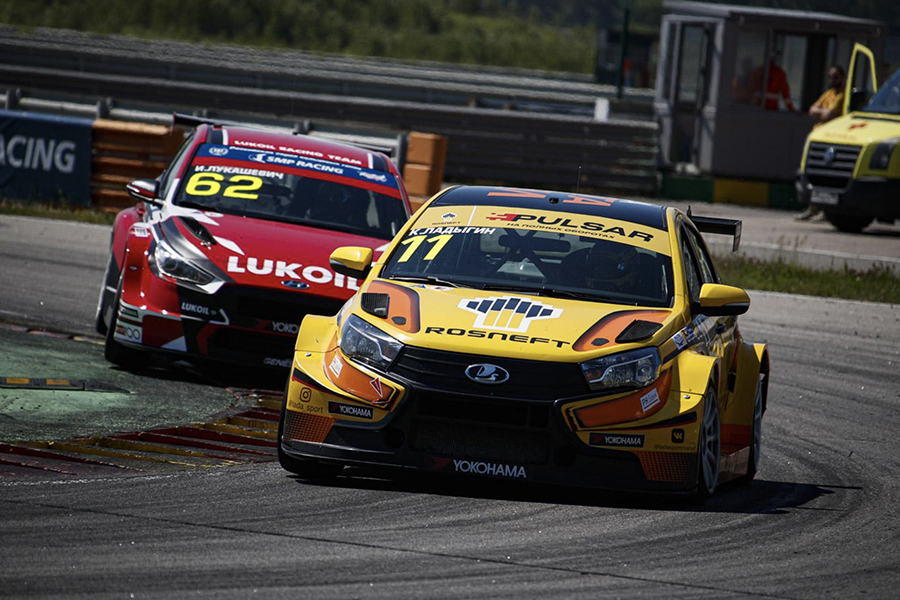 Kirill Ladygin extended his lead in the TCR Russia series after a lights-to-flag win in Race 2 at Igora Drive. Despite a late challenge by Dmitry Bragin on the final lap, Ladygin’s LADA Vesta Sport finished ahead of Bragin’s Audi RS 3 LMS by just under two seconds with the Hyundai i30 N of Ivan Lukashevich completing the podium positions.
Thanks to a favourable draw, Ladygin started the reversed-grid race from pole position with Egor Fokin’s A.M.G. Motorsport LADA alongside on the front row. Ladygin made a good start and led going into Turn 1, but Bragin made a better start from P4 than Aydar Nuriev and so it was Bragin that was in third place behind the two LADA drivers. The traditionally frantic opening lap saw Pavel Kalmanovich drop from eighth on the grid to P14 by the end of the lap.
At the start of Lap 2, Bragin made a move to pass Fokin for second place and the pair made contact in Turn 1 as Bragin muscled his way through. On the following lap, Lukashevich and his Lukoil teammate Andrej Maslennikov ran side-by-side through several corners as the pair battled for seventh place, with Lukashevich eventually coming out ahead after there was contact between Maslennikov and one of the Carville Racing Hyundai cars.
On Lap 5, Egor Orudzhev passed Nuriev for fourth position with Orudzhev determined to salvage something from the weekend after being forced to sit out of Race 1 with a broken driveshaft. Within a couple of laps, the unfortunate Nuriev appeared to lock his brakes and so ended his race stranded in the gravel while Orudzhev had a podium finish in his sights and had closed up on Fokin. A lap or so later and Lukashevich had joined the battle, forcing Orudzhev to defend fourth place and so taking some of the pressure off Fokin. At the start of Lap 14, however, Orudzhev had closed in on Fokin once again and attempted a brave overtaking move up the inside going into Turn 1. He locked up and ran wide, but then was forced to limp back to the pits with a flat front-left tyre.
The final lap was then fairly chaotic. Bragin had closed in on Ladygin while Lukashevich was also attacking Fokin for third place. When the leading pack encountered backmarkers from the Super Production class only a few corners from the end, Ladygin made a daring move and placed a couple of slower cars between himself and Bragin to secure his second victory of the season. Behind them, Lukashevich seized his chance and snatched third place from Fokin by just over two-tenths with Mikhail Mityaev, the winner of Race 1, a similar margin behind Fokin in fifth.
However, after the race Fokin was dropped from fourth to 11th by a 30-second penalty for overtaking under yellow flags.
The next event will be at Moscow Raceway on August 21/22.