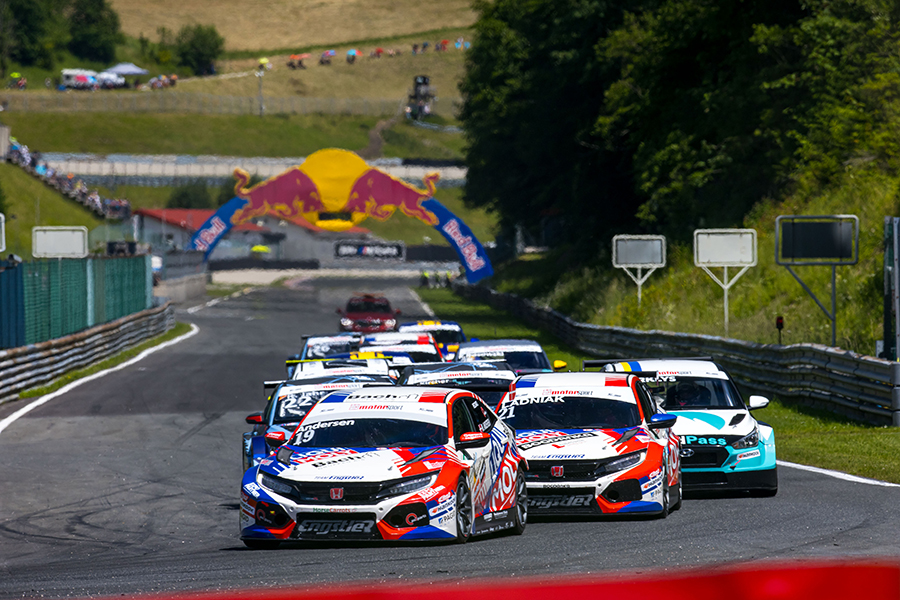 The third event of TCR Germany at the Salzburgring ended with Szymon Ładniak and Jessica Bäckman sharing race victories. The Pole claimed his maiden win in Race 1 at the wheel of an Engstler Motorsport Honda Civic, while in Race 2 the Swedish lady scored her fourth victory out of the six races held so far.

Ładniak had set pole for Race 1, beating Martin Andersen by two tenths and led at the start, but the Dane overtook him while entering into Turn 1. Ładniak was quick to strike back, retook the lead at the beginning of lap 3 and then pulled away easily. Behind the leading duo, René Kircher overtook his teammate Robin Jahr for P3 in lap 8. In the final part of the race, Andersen struggled to defend the second place as he was closely chased by Kircher and Jahr. Twice Kircher drew up beside Andersen in the final corner, but the Honda driver managed to keep him at bay and crossed the line with a five-tenth margin.

Bäckman was fastest in the Qualifying for Race 2, and she made good use of the pole leading into T1 and then bidding the rest of the field farewell. Behind her, Andersen, Jonas Karklys and Jahr were second, third and fourth, while Ładniak dropped from third on the grid to sixth. The Pole joined Kircher and Max Gruhn in a thrilling battle for P5 that ended in lap 5, when both Kircher and Ładniak went straight at the chicane and dropped some places. During the last part of the race, Jahr closed in on Kakrlys and looked set to attack him, but then slowed down. Up front, Bäckman had built a comfortable margin over Andersen and they both cruised unchallenged to the end. Karklys completed the podium while Ładniak recovered to finish fourth.
However, Karklys was later excluded for there was not enough fuel left in the tank for the technical checks.

The victory meant that Bäckman has reduced her gap in the standings to eight points from Andersen, while Ładniak is third, 27 points behind his teammate.
The series will race again at the Nürburgring on 6/7 August.