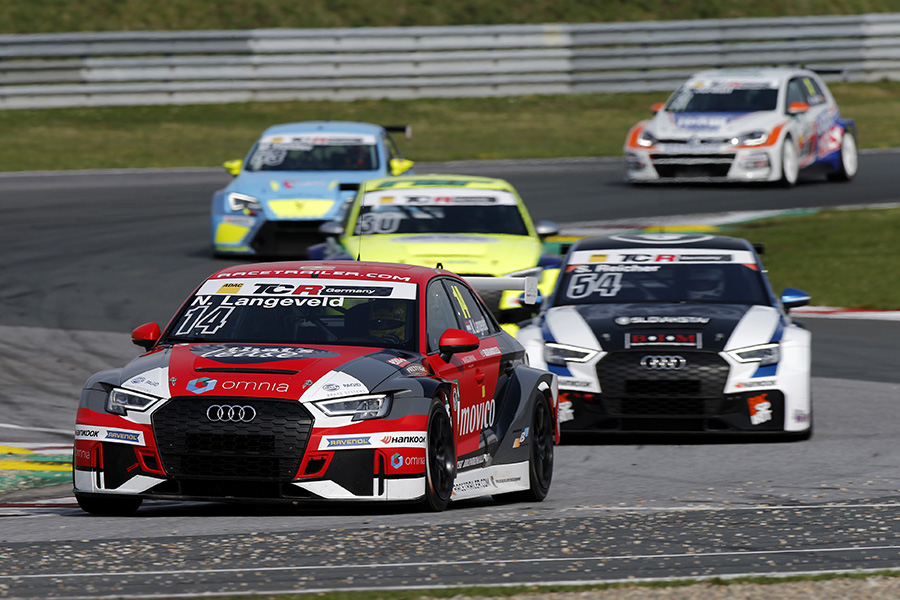 Niels Langeveld took full advantage of his pole position to claim an authoritative lights-to-flag victory in TCR Germany’s Race 1 at the Red Bull Ring, which helped him to join local driver Harald Proczyk on top of the championship standings.
Langeveld started well, followed by Antti Buri, Proczyk and Mike Halder, while Max Hesse who was third on the grid found himself in eight after a few hundred metres.
Halder tried to overtake Proczyk at Turn 1, but missed the braking point and hit the back of Buri’s car. The Finn was able to control his Audi and maintained the second position, while Halder dropped to fifth behind Benjamin Leuchter.
The safety car was deployed at the end of lap 3, after Lukas Niedertscheider’s Peugeot and Daniel Davidovac’s Opel made contact and crashed.
When the race resumed on lap 6, Langeveld pulled away, Buri was second and Proczyk was defending third place from the assaults of Leuchter and Halder. On lap 9, Proczyk was a bit wide at Turn 1; Leuchter and Halder did not miss the opportunity to overtake him, moving up to third and fourth respectively.
The positions remained frozen for the rest of the race, with the Audi cars of Langeveld and Buri making a 1-2, followed by Leuchter’s Volkswagen Golf, Halder’s Honda Civic and Proczyk’s Opel Astra. Luke Wankmüller finished sixth ahead of Luca Engstler, Max Hesse, Florian Thoma and Simon Reicher.
In the championship classification, Proczyk and Langeveld are now on top on equal points (145), with Engstler third (130) and Halder fourth (113).
Race 2 will start tomorrow at 14:45 (live streaming at www.tcr-series.com and www.tcr-series.tv).