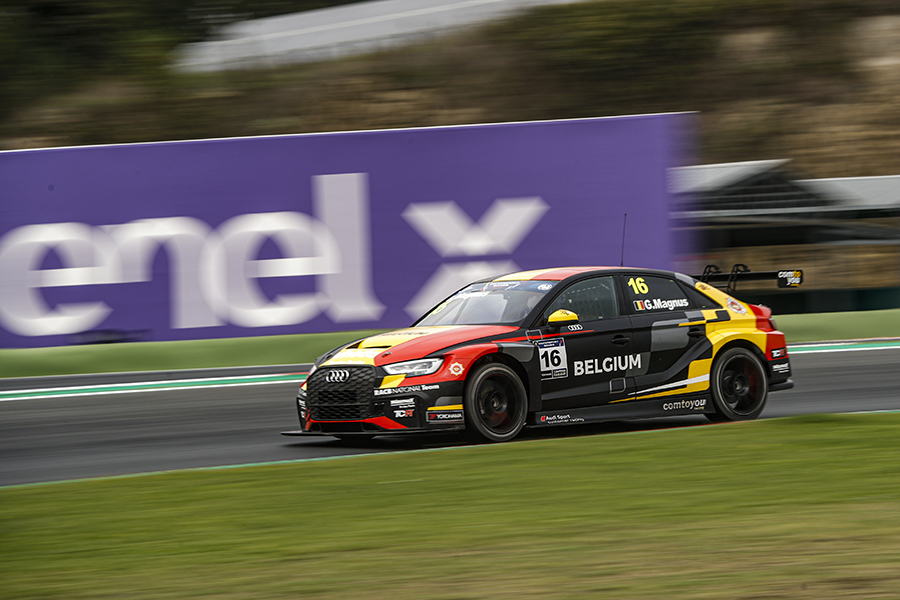 Last gasp pole for Magnus in the second Qualifying

It was a last gasp effort from Gilles Magnus that granted him and Team Belgium the pole position for Sunday’s Race 2 of the FIA Motorsport Games’ Touring Car Cup.
The Belgian youngster completed a nearly perfect lap of Vallelunga just before the 30-minute session expired and clocked a 1:40.235 that was half-a-second faster than Klim Gavrilov’s provisional fastest lap of 1:40.730. The Russian was then demoted to second, completing and all-Audi front row for Race 2.
Towards the end of the session, Tom Coronel posted the third fastest lap of 1:41.011 and so demoted Mat’o Homola to fourth, while New Zealander Touring Car rookie Faine Kahia was an impressive fifth fastest ahead of Jessica Bäckman and John Filippi.
Jim Ka To, Enrico Bettera and Rory Butcher filled the positions between eighth and tenth.
After emerging as the fastest in Qualifying 1, Luca Engstler was forced to miss the second session due to an engine failure and so he will start from the back of the grid in both races.
The session was disrupted once by the red flag after ten minutes, when the Peugeot 308 of Gonzalo De Andrés stopped on the track. To add insult to injury the Spaniard’s fastest lap of 1:42.478 that would have placed him 13th on the grid was disallowed for having caused the interruption, and so he will start 19th instead.
Race 1 is schedule to start at 13:15 local time (CET) over the distance of 25 minutes plus one lap; it will be streamed live at www.tcr-series.com and www.tcr-series.tv. Following the grid penalty for Engstler, Gavrilov and Homola will share the front row.