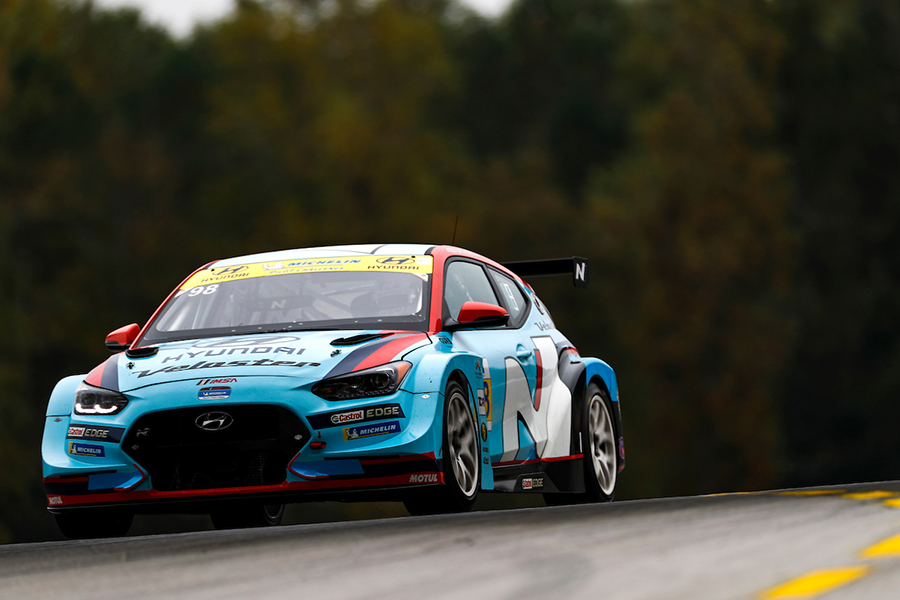 At Road Atlanta, IMSA reigning TCR champion Michael Lewis had to use up all his experience to beat TC America freshly-crowned champion Tyler Maxson on his rookie appearance in the Michelin Pilot Challenge. After a thrilling 2-hour race, that was disrupted four times by the safety car and saw seven teams alternating in the lead, Lewis took the chequered flag with half-a-car margin over Maxson who was sharing the Copeland Motorsports Hyundai Veloster N with Tyler Gonzalez, forming a duo that totalled 33 years.
Todd Lamb’s Atlanta Speedwerks Honda that sat on pole was given a drive through for jump-start and so Max Faulkner took the lead in the Fast MD Racing Audi chased by a bunch of five Hyundai cars. Faulkner kept them at bay for ten minutes until he was passed by Ryan Norman.
The first half of the race was neutralized by the safety car twice for more than half-an-hour, which enabled Lamb to recover and take the lead while most of the other cars had made a first pit stop. Between the two full course yellows, Norman’s codriver Gabby Chaves who was placed third, pitted with a broken front suspension.
Lamb finally pitted after one hour and 14 minutes, handing the car to Brian Henderson and the lead passed to Ryan Eversley’s Honda. A few moments later the safety car was deployed for the third time when Matt Pombo’s Honda crashed, Eversley used the neutralization to pit and so the Alfa Romeo of Tim Lewis inherited the lead, but it was soon passed by the Hyundai cars of Lewis, Maxson and Harry Gottsacker and by Henderson’s Honda.
With 24 minutes left, Parker Chase’s Hyundai hit James Vance’s Audi that crashed into the bridge and the safety car got to the track again; during this period Lewis’ Alfa Romeo stopped on the track and retired.
The race resumed with only six minutes left and suddenly Maxson stole the lead from Lewis with a daring overtaking manoeuvre, while Henderson passed Gottsacker for P3. But Lewis didn’t give up and retook the lead from Maxson during the final lap, beating him by 99 thousandths of a second.
The victory meant that Lewis and his codriver Mason Fillippi have taken the lead in the standings with a margin of 8 points over Norman/Chaves while Wilkins/Gottsacker are in third position a further three points adrift.
The series will come to an end at Sebring on November 11/12.