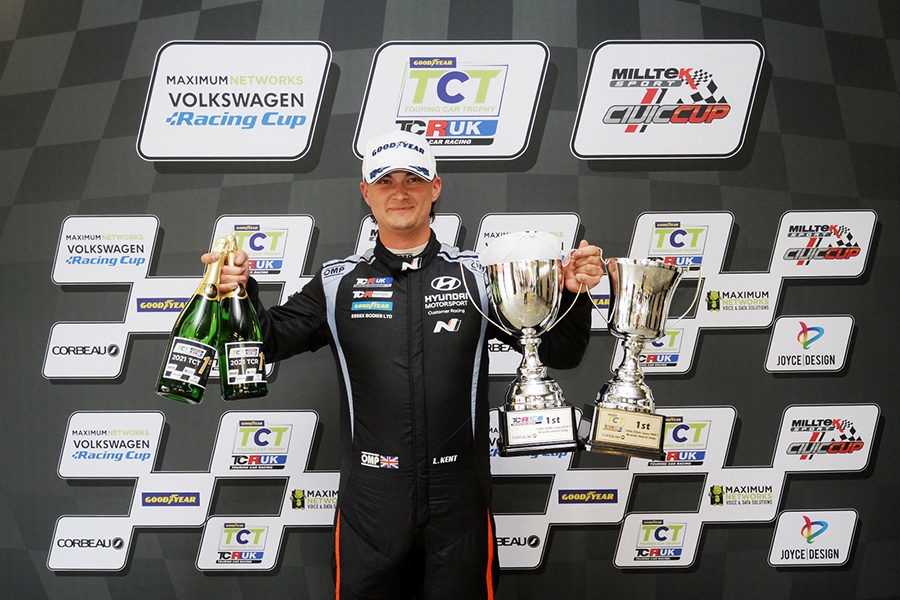 Reigning champion Lewis Kent won the second TCR UK race at Oulton Park, his third win of the season so far, and extended his leadership in the standings, while his brother Bradley lost the second position in the points after a technical pit stop. Alex Morgan and Max Hart delivered a thrilling fight for the remaining spots on the podium.
The fourth place on the grid remained empty, as Bradley Kent’s Huyndai returned to the pit lane with some electrical issues and managed to join the race only after the field had covered half-a-lap.
Too much wheelspin meant that pole sitter Dan Kirby was pipped at the start by Lewis Kent who led the field from P2 on the grid. During the opening lap, Morgan passed Kirby for second and in the following lap, Kirby dropped to fourth behind Hart, while Jac Constable passed Bruce Winfield for P5.
Hart, Kirby, Constable and Winfield delivered a thrilling show as they were fighting for the third position and Constable passed Kirby for fourth in lap 3.
In lap 5, Bradley Kent pitted again and lost one lap before rejoining.
Race 1 winner Constable, who was running in fourth position, missed the braking point at the chicane and rejoined at the back of the field.
During the final laps, Hart attacked Morgan and passed him in lap 12, but a few hundredths metres later he made a mistake and handed the second position back to Morgan.
Lewis Kent won by 4.5 seconds ahead of Morgan, with Hart third a further five tenths behind.
Bradley Kent scored 8 points for the 11th position plus one for the fastest lap and so dropped from second to fourth in the standings.
His brother Lewis has extended his leading margin to 52 points over Hart, while Kirby advanced to third, seven points behind Hart and three ahead of Bradley Kent.
The next event of TCR UK will be at Anglesey, in Wales, on 8 August.