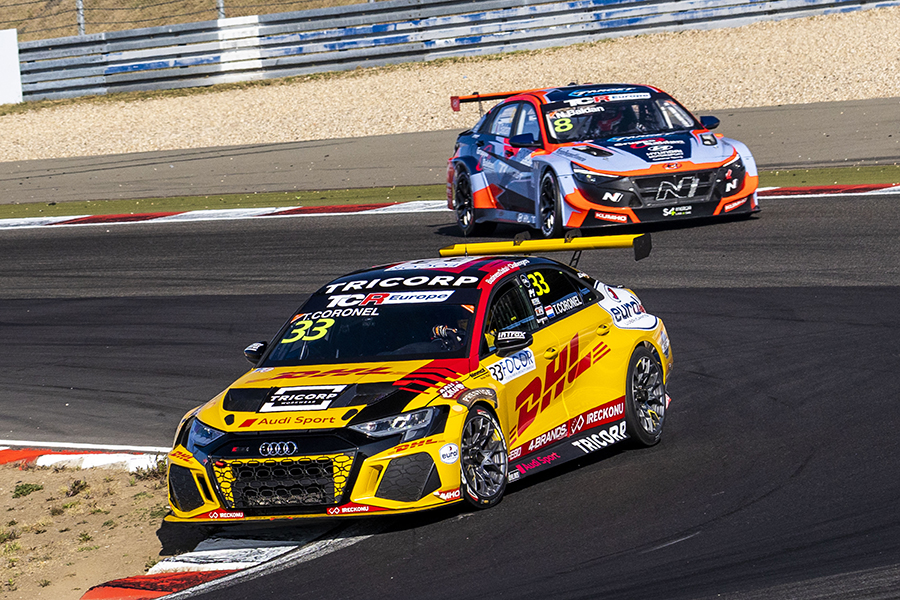 Tom Coronel took his second TCR Europe victory of the season by winning the rescheduled Race 1 at the Nürburgring in his Comtoyou Racing Audi RS 3 LMS. Nicola Baldan was second and championship leader Franco Girolami completed the podium positions.

Coronel made a good start from the pole and led Baldan into Turn 1, while Girolami made a better start than Jack Young and was third; they both ran wide at the exit to Turn 1 after apparent contacts but remained in the leading group. Young again ran wide after trying to avoid contact later and retired with steering damage resulting from the incidents.

While gaps were opening up between the top three cars, there was a fight developing for fourth place; Isidro Callejas was fourth and scrapping with Pepe Oriola. Oriola briefly passed Callejas on lap 2, but the teenager retook the position. In the next lap there was contact between the pair, which caused Callejas to spin and drop to the back of the field.

By lap 4, there were two great battles developing between four Hyundai Elantra cars for fourth to eighth places. Oriola was being attacked by Felice Jelmini, whose teammate Josh Files was defending sixth place from Jáchym Galáš. Oriola and Jelmini made contact on lap 6, while Galáš tried to go around the outside of Files into Turn 1 on lap 8, but Files defended the position and ran onto the grass following another contact.

With Coronel over two seconds ahead of Baldan and Girolami seemingly content to cruise home in third place, the battles between the four Hyundai cars provided some late drama. On the final lap Jelmini dropped a place and so Files was able to finish fifth behind Oriola.

The results mean Girolami has extended his lead over Files in the standings to 78 points, with Coronel’s win lifting him back into third place, a further 13 points behind.

The next event of TCR Europe will be at Monza on 23/25 September.