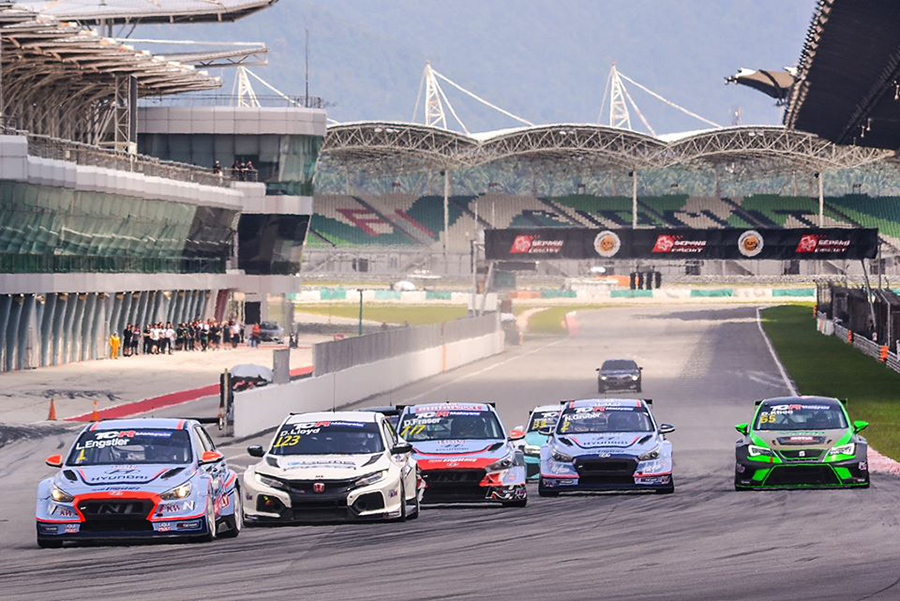 Daniel Lloyd emerged as the first leader of TCR Malaysia after the season’s opener at Sepang. The Briton and his Brutal Fish Racing Honda Civic were second in Qualifying and in both races that were won by Luca Engstler and Nico Gruber. The Hyundai cars showed a superior pace, but as Gruber retired in Race 1 and Engstler had tyre issues in Race 2, Lloyd’s pocketed the highest score of the weekend. Local racer Gilbert Ang completed a brilliant Touring Car debut as he finished twice third in his Viper Niza Racing CUPRA.
Engstler had claimed pole position in Qualifying with a lap of 2:14.669 that was half-a-second faster than Lloyd’s 2:15.219. Gruber had his two fastest laps cancelled due to track limits infringement and was then placed seventh on the grid while his best effort of 2:15.351 would have meant third position.
At the start of Race 1, Engstler took the lead from Lloyd who managed to stay in close contact during the early stages, however, from lap 5 the young German was able to consistently increase his margin a crossed the line four seconds ahead of his rival. Behind them, Declan Fraser defended the third position, but he was soon passed by Gilbert Ang and Gruber and then by Freddie Ang. With two laps to go, both Gruber and Fraser returned to the pits; the Austrian retired having damaged his car in a contact with Gilbert Ang, while the Australian re-joined, having lost one lap for changing the front tyres. This promoted Freddie Ang and Yang Xi to fourth and fifth.
From second on the reverse grid, Gruber pipped pole sitter Yang and led, while Lloyd and Engstler quickly advanced to second and third. Engstler put the pressure on Lloyd; for several laps the Honda driver managed to close all the gaps and in the second half of the race shook Engstler off his back. Lloyd, then, tried to close in on Gruber, but the Austrian had built a solid margin and claimed his maiden Touring Car win with a one-second margin. During the last laps Engstler experienced tyre issues and dropped down the order, while Gilbert Ang beat Fraser in the battle for third.
TCR Malaysia will resume with rounds 3 and 4 on February 15/16, still at Sepang.