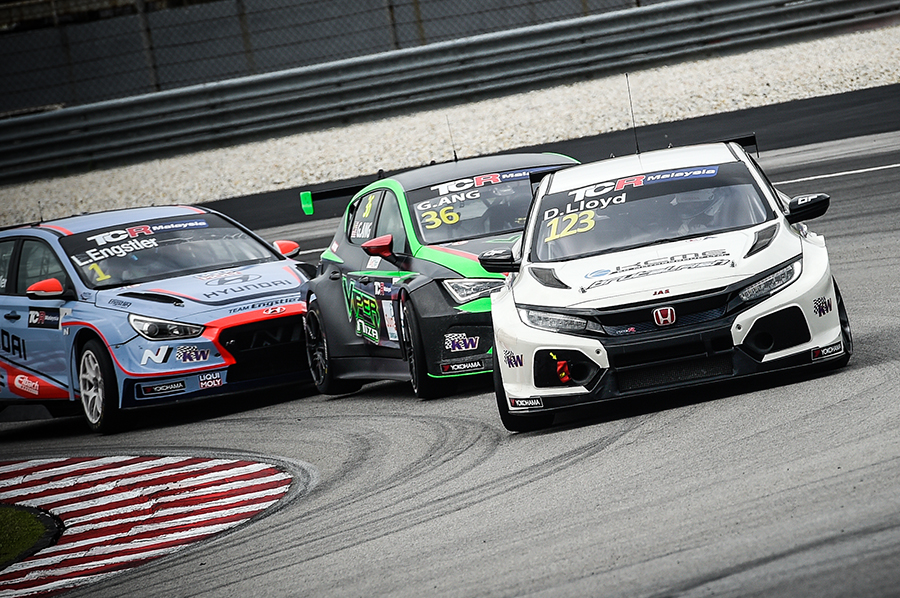 Lloyd stays in the lead after two thrilling races

Daniel Lloyd maintained his leadership in the TCR Malaysia standings after two thrilling races at Sepang International Circuit. After finishing Race 1 in second position behind Luca Engstler, Lloyd scored his maiden victory in the championship when he was able to take advantage from the tyre issues and mistakes of his rivals in Race 2. With only one event still to go, the Brutal Fish Racing driver has built a leading margin of 19 points over Engstler and the amazing Gilbert Ang who put in two fantastic races to finish twice on the podium.
Lloyd was promoted to the pole for Race 1, following Engstler’s penalty that dropped him to fifth due to an engine change; Douglas Khoo was demoted to seventh for the same reason. Lloyd took the lead at the start from Ang, Nico Gruber and Josh Files, but during the first lap Engstler moved up to third, ahead of Files and Gruber. The three leaders ran in a close formation for the first four laps, but when Ang and Engstler had a fight over the second place, Lloyd was able to create a 2.4-second gap at the end of lap 6. Despite Ang’s great defensive drive, Engstler overtook him on lap 7 and began chasing Lloyd whose gap was cut to 1.4 and then to 0.3. In lap 10 Lloyd and Engstler ran abreast into a few turns and touched, until Engstler managed to get the lead and pulled away towards his second victory of the season, with Lloyd finishing second ahead of Ang.
Tommy Ku was on pole of the reversed grid for Race 2 with Ang alongside, but Ku span at T2 following contact with Files who then took the lead from Ang and Engstler. In lap 2, Engstler overtook Ang for P2 and began chasing Files. For several laps Files managed to keep Engstler at bay, while Ang and Lloyd followed them closely, then on lap 8 Engstler lost control and went off, which prompted the safety car into action. Racing resumed for the final lap with Ang attacking Files who was struggling with tyre problems; the young Malaysian went wide and Lloyd took the opportunity to pass him and then he stole the lead from Files taking the win, behind him Ang pipped Files on the line for P3, with Gruber finishing a close fourth.
TCR Malaysia will come to an end with rounds 5 and 6 on February 28/29, still at Sepang.