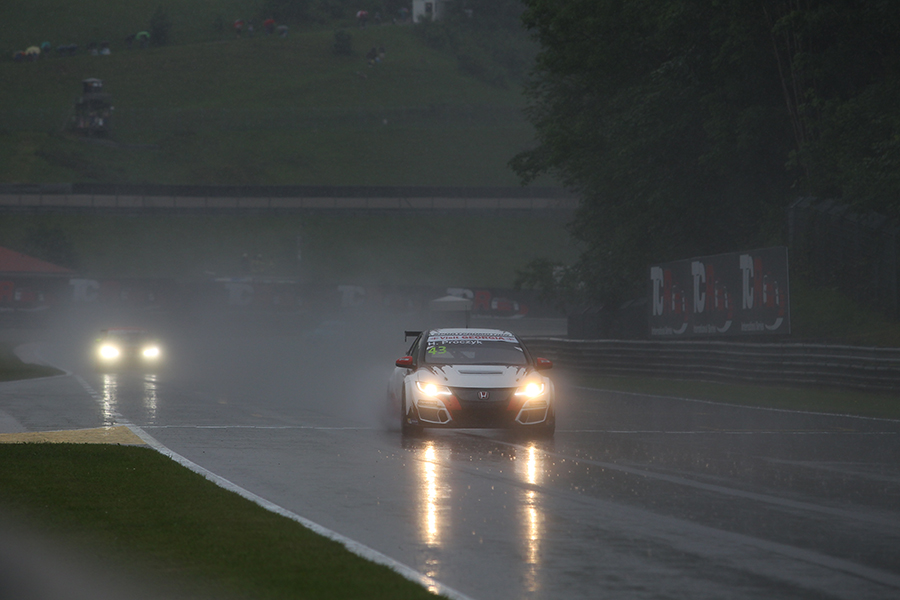 Austrian racer Harald Proczyk achieved an outstanding and unexpected result by winning pole position at the wheel of his WestCoast Racing Honda Civic car in his maiden appearance in the TCR International Series.
Proczyk, who had already won a TCR race in the German series with his SEAT, benefited from the changing conditions of the Salzburgring that grew worse during the session as long as the rain intensified. He was actually the first one to admit that this pole was more due to that than to his control of the car.
As some of the usual main contenders struggled with different issues – Stefano Comini, James Nash and Mat’o Homola – Jean-Karl Vernay and Pepe Oriola were able to capitalize and qualified in second and third ahead of Gianni Morbidelli.
On his first outing for the Mulsanne Racing, Petr Fulín placed his Alfa Romeo Giulietta in eighth, the best result so far for the Italian car. His teammate Michela Cerruti did not take part in the session as her Giulietta was sidelined by engine problems that were the consequence of her trip on the gravel trap during this morning’s first Practice.
Attila Tassi and Mikhail Grachev qualified in tenth and ninth respectively and will be on the front row of the top-ten reversed grid for Race 2.
The first race will start this tomorrow at 12:35 local time, over a distance of 15 laps.

Q1: 1-2 for WestCoast Racing
A red flag first and the rain after, spoiled this part of the session and eventually the chances of Stefano Comini and James Nash to make the cut for Q2.
The red flag was waved in the early stages, after a double incident at Turn 1 that saw Davit Kajaia’s Volkswagen stranded onto the gravel trap and Mat’o Homola’s SEAT hitting the barriers.
When the session resumed, the crew of B3 Racing Team managed to replace the front splitter on Homola’s car. In the meantime, the Slovak’s teammate Attila Tassi had posted a fastest lap of 1:26.682 that was not to be beaten, as rain poured down with nine minutes left on the clock.
Comini was one of the few to make a qualifying attempt after he had missed the dry part of the session while his team’s crew was working to replace the gearbox. However, on the wet track the Swiss could not clock a time good enough for advancing to Q2.
Davit Kajaia, who had rejoined and set the 12th fastest lap, was later excluded for having received external aid after his incident at Turn 1, and this handed his teammate Florian Janits the last spot for Q2. As for Nash, his cars suffered from transmission problems, which sidelined him for the whole time.
The following drivers made the cut: Tassi, P. Oriola, Morbidelli, Afanasyev, Borković, J. Oriola, Grachev, Vernay, Fulín, Proczyk, Homola and Janits.

Q2: Proczyk claims surprise pole
Newcomer Harald Proczyk surprisingly emerged as the pole sitter in a Q2 that was flooded by pouring rain. The Austrian was the first one to hit the track and set a time of 1:38.923 that he managed to improve on the following lap to 1:38.767. Soon afterwards the rain intensified, making impossible to go faster than that.
Jean-Karl Vernay (1:39.079) and Pepe Oriola (1:39.359) secured the second and third places on the grid, while a last gasp improvement from Sergey Afanasyev granted him the seventh place and demoted Mat’o Homola from 10th to 11th, stripping him of the pole position on the reverse grid for Race 2.