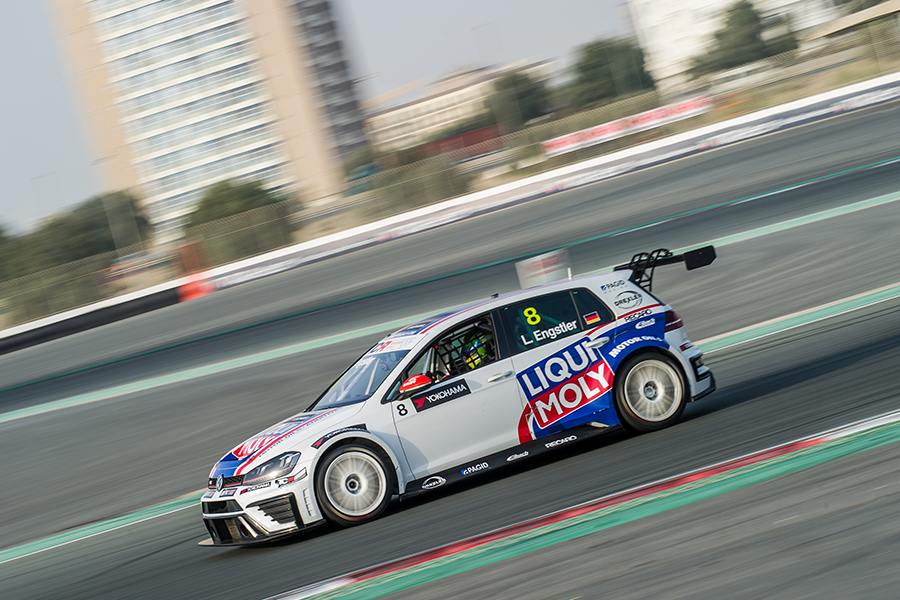 The 16-year old Luca Engstler claimed the first pole position ever in the TCR Middle East Series. During the inaugural Qualifying session at Dubai Autodrome, the German teen-ager drove his Volkswagen Golf GTi TCR to a fastest lap of 2:10.133, inflicting a half-a-second gap to his more experienced teammate Mat’o Homola.
Homola was on top of the time sheet in the first part of the session when he set a provisional fastest lap of 2:11.290 that he managed to improve to 2:10.632.
Brandon Gdovic moved provisionally into second position with a lap of 2:10.759, but was then demoted to third when Engstler posted his pole position time a few minutes before the end. Engstler, Homola and Gdovic meant a brilliant 1-2-3 result for the Liqui Moly Team Engstler.
The Italian duo of Michela Cerruti and Luigi Ferrara was involved in a close fight for the fourth position. Ferrara was clocked at 2:11.059 in the Top Run Subaru that provisionally placed him in second position. A few moments later Cerruti exactly matched Ferrara’s time, but the two of them dropped to fourth and fifth following the improvements by Engstler and Gdovic.
Both Ferrara and Cerruti went out for a final attempt; Michela in the Mulsanne Racing Alfa Romeo Giulietta clocked her own second fastest lap of 2:10.073 that helped her to move up from fifth to fourth, while Ferrara could not improve.
Filip Sládecka ended in sixth place ahead of James Kaye in the CadSpeed Racing Audi. Both Kaye and Kane Astin (Red Camel-Jordans SEAT León) were struggling as the teams had to adapt the cars to the different specs of the TCR Middle East and the 24 hour race in terms of weight, ride height and tyres.