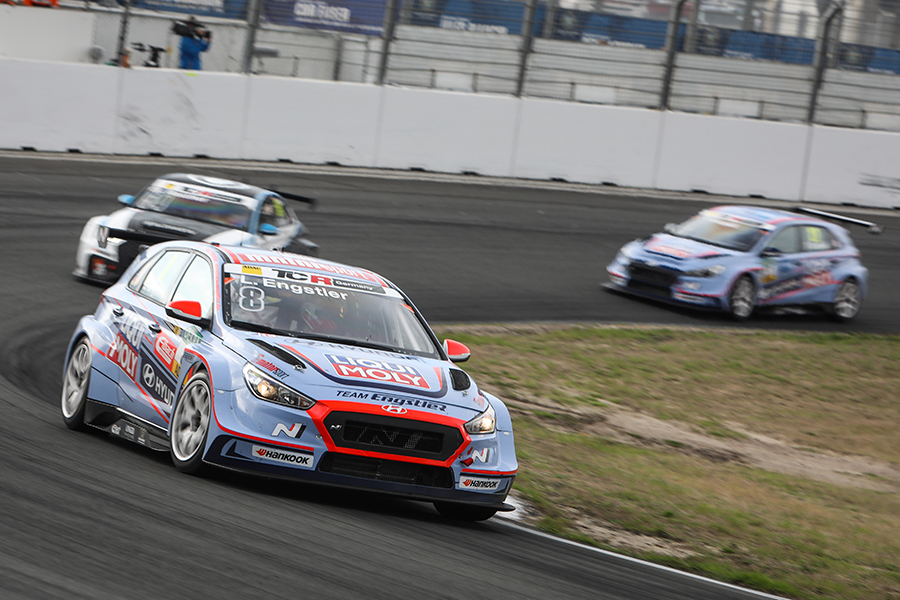 After scoring his maiden victory in TCR Germany during the previous event at Zandvoort, Luca Engstler has claimed his first pole position in the series at the Sachsenring.
On his first flying lap in Q2 at the wheel of his Hyundai i30 N, Engstler clocked a lap of 1:26.524 than nobody was able to beat. Mike Halder’s Honda Civic Type R and Harald Proczyk’s Opel Astra were the only other cars that went under the 1:27 mark.
Halder improved in three consecutive laps from 1:26.804, to 1:26.732 and finally 1:26.549 that gave him the second position on the grid for today’s Race 1, 25 thousandths of a second behind Engstler and 62 ahead of Proczyk.
The current points leader Niels Langeveld struggled to be on the pace with his rivals in the title fight. He only ranked 11th in Q1 and eventually qualified 10th in Q2, a position that will grant him pole position on the reversed grid for Sunday’s Race 2; Michelle Halder’s Cupra will line up alongside his Audi RS3 LMS on the front row.
The Q1 part of the session saw 19 drivers covered by less than one second. Mike Halder set the fastest lap (1:27.081) and Loris Prattes (1:27.545) was the last of the twelve who made the cut for Q2, eliminating Antti Buri and Dominik Fugel by eight hundredths of a second. It is worth to point out the 16th position of Alex Morgan in the Besagroup Racing Renault Mégane, six tenths behind Halder, the best result so far for the French car.
In Q2, behind the top three, series returnee Pascal Eberle’s Cupra ranked fourth (1:27.075), followed by Justin Häussermann’s Volkswagen Golf GTI (1:27.118) and Théo Coicaud’s Hyundai (1:27.206).

The weekend’s first race will start at 12:45 CET (live streaming at www.tcr-series.tv).