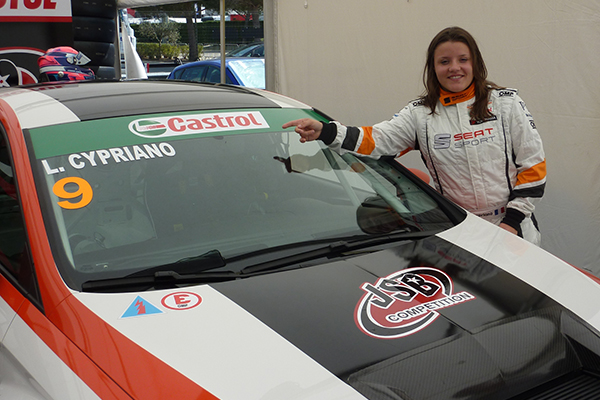 Lucile is ready to take up the TCR challenge…

Next weekend at Valencia, Lucile Cypriano will become the first lady driver to compete in the TCR International Series, but for the time being, … she doesn’t care much, as she is busy debuting in the SEAT León Eurocup this weekend at the Circuit Paul Ricard.
“I will start thinking about the TCR on Monday”, she acknowledges, “and probably I will stress a bit. It’s a very high-level competition and everything will be new to me: the track, the tyres and the vast majority of my rivals…”
Still, the 18-years-old from Nice (but born in the Paris region) does not seem to be the kind of girl that gets easily afraid. In her very first practice session in the SEAT León Eurocup at Le Castellet, she was second-fatest! And despite her very young age, she has quite some racing experience. “I actually started karting at the age of seven”, she explains with a big smile, “As much as I can go back into my childhood memories, this is what I really wanted to do. Having a dad that runs karting tracks may have helped, I guess…”
After ten years with go-karts, Lucile graduated to F4 single-seaters and in 2014, she contested the very competitive VW Scirocco R Cup in Germany, where she performed well, finishing 10thoverall and 4thin the rookie standings. That opened her the door of the SEAT León Eurocup, in the framework of the FIA-supported “Women in Motorsports” programme.
A student in Sports Science when she is not racing, Lucile is ready to make the best use of the JSB Compétition SEAT León Racer at Valencia, and seems to have a clear idea of what she likes about motor racing: “I love speed, of course, but what I like most is competing and fighting…”