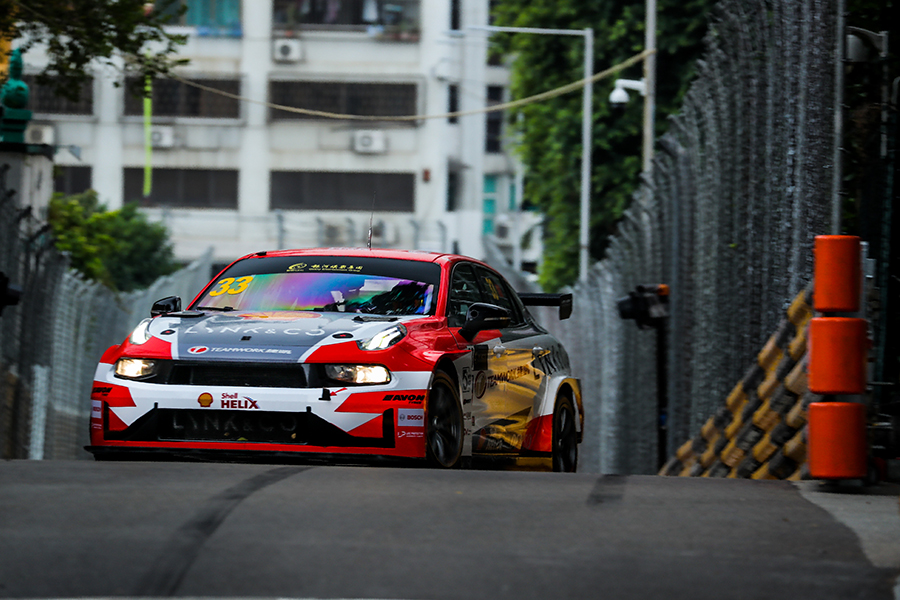 Ma Qing Hua beat his Shell Teamwork Lynk & Co teammate Zhang Zhi Qiang in the first TCR Asia race at Macau, sending the title fight down to the wire. Zhang’s lead in the standings over Ma went down to 14 points, with 25 on offer in tomorrow’s Race 2.
Ma made good use of his pole, while Filipe de Souza made a bad start and dropped from second to sixth behind Andy Yan, Zhang, Lo Sze Ho and Tang Chi Lun. Ma rejected an attempt from Yan at the Lisboa and the Honda driver was then passed by Zhang for P2 at the Mandarin bend in lap 2.
Behind the leading quartet, de Souza passed Tang for fifth, but Tang recovered the position soon afterwards.
The fight for P2 between Zhang and Yan continued, which helped Ma to build a small gap. In lap 4, Chan Weng Tong’s VW Golf hit the barrier at Moorish Hill, bounced back and collected the CUPRA of Yang Xiao Wei that stopped on the track and would stay there for the rest of the race.
In lap 5, de Souza repassed Tang for P5, while Zhang shook Yan off and closed in on Ma, setting the fastest lap. In lap 6, Sunny Wong overtook Tang for P6, while Yan returned to the pit, which promoted Lo to third.
In lap 7, the leading pair took a lap to the Audi of Liu Qi, Zhang benefited from the situation and stuck on the tail of Ma’s car, but the latter was able to keep him at bay until the chequered flag, winning by 0.38 seconds.
During the final lap, Tian Kai’s Audi hit the tyre wall at Lisboa, while Lo kept de Souza at bay to finish third.
Race 2 will start tomorrow at 12:05 local time (5:05 CET).