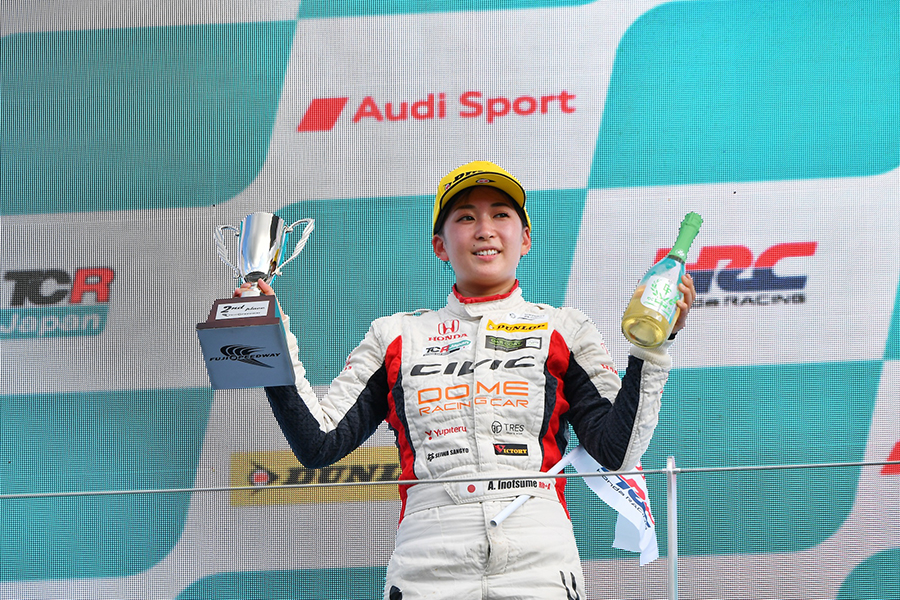 Maiden victory for Anna Inotsume in TCR Japan at Fuji

Anna Inotsume took her maiden win in TCR Japan, as she dominated the second race at Fuji Speedway. The victory meant that she reduced her gap in the Sunday Series’ standings to 20 points behind ‘Hirobon’, when 30 points will be on offer in the season finale at Suzuka on 28/30 October.

On the other hand, ‘Hirobon’ beat Inotsume in the Saturday Series’s race, increasing his leading margin to 30 points and securing a second consecutive title.

Race 1 – ‘Hirobon’ and Inotsume filled the front row; while the former made a good start, Masanobu Kato and Junichi Agematsu got past Inotsume moving into second and third. ‘Hirobon’ began to pull away, while Inotsume was chasing the pair in front of her; she overtook Agematsu for third in lap 6 and eventually Kato for second as they negotiated the final bend during the last lap.

‘Hirobon’ won by a large margin, securing the Saturday Series’ title even before the final race; Inotsume and Kato filled the other podium steps ahead of Agematsu, while a puncture forced Resshu Shjoya to retire from fifth during the penultimate lap.

Race 2 – Inotsume started from pole ahead of Mineki Okura who was faster and took the lead, but during the first lap the lady driver overtook Okura who struggled to defend the second place from ‘Hirobon’, Agematsu and Kato. Inotsume benefitted from the battle behind her and built a solid lead, while Okura was able to shake his pursuers off and looked set to finish second until the final lap, when his Alfa Romeo lost power and pulled over. Inotsume won by 11.6 seconds over ‘Hirobon’ who kept Kato at bay to finish second.