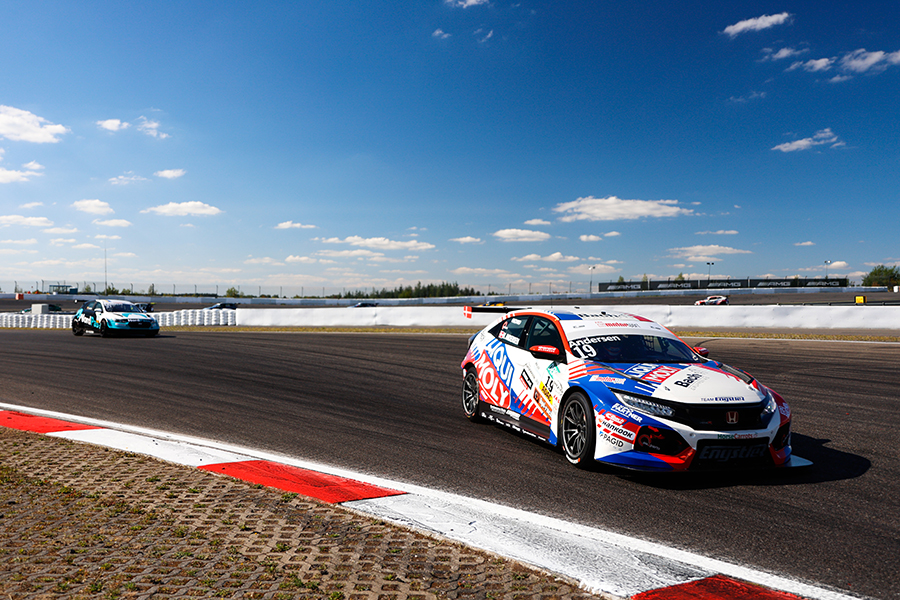 Martin Andersen took two pole positions and two race wins in TCR Germany at the Nürburgring to mark a perfect weekend for him.

Race 1 – Andersen qualified on pole ahead of his teammate Szymon Ładniak by just over three-tenths, and at the start aggressively covered him off to ensure he led the way into the first corner. This allowed Jonas Karklys’ Hyundai i30 N to get around the outside of Ładniak’s Honda and up into second place. Meanwhile, Jessica Bäckman, Andersen’s closest title challenger, was running in fourth in her Hyundai Veloster, fighting to keep back the wild card entry Audi of Marco Butti, but she eventually was able to pull away as the young Italian’s challenge faded. Her teammate René Kircher was making good progress after starting from the back of the grid, and he was up to fifth by lap five, before he was turned around by teammate Robin Jahr, which sent Kircher to the back of the order and saw Jahr awarded a drive-through penalty. Bäckman closed up on the Honda of Ładniak at the mid-point of the race, and after a tight battle, eventually made her way through up to third on lap 12. Andersen was also struggling for pace and was being harried by Karklys, but the Lithuanian was unable to find a way past, with Andersen claiming the win by just under three-tenths of a second.

Race 2 – Andersen again qualified on pole position, but this time he had a slow start and was immediately passed by Bäckman into Turn 1. Andersen quickly caught back up to the Swedish driver and retook the lead, while Bäckman defended against Ładniak. The Pole made a move but ran wide, allowing the Audi of Butti through up into third, as well as Kircher’s Hyundai. Butti then launched an attack on Bäckman a few laps later but ran wide and seemed to suffer from a loss of power, returning to the pits to retire. Ładniak’s race ended a few laps later with a problem on the front-left corner of his Honda Civic. Andersen won again by just under two seconds ahead of Bäckman, with Kircher just over three seconds further behind.