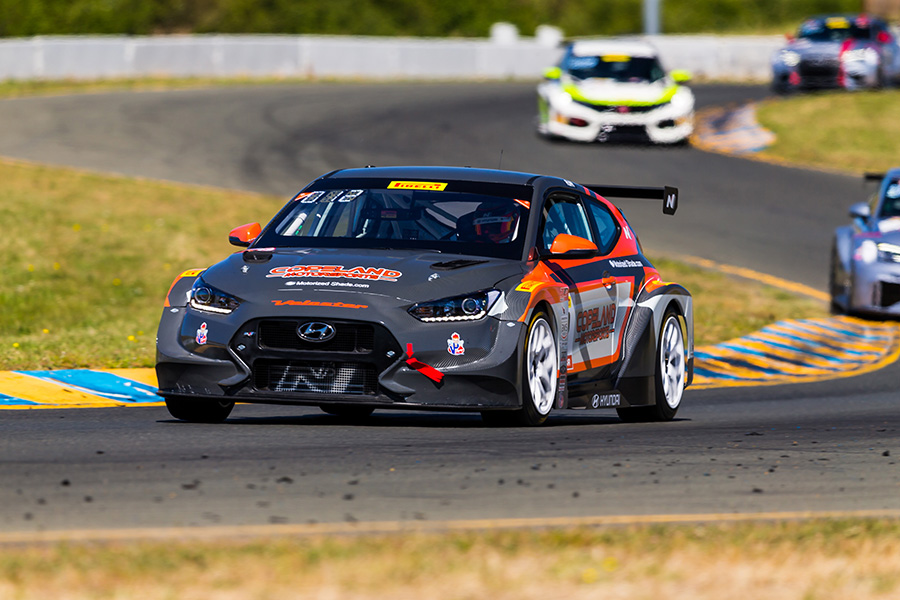 Mason Filippi made up for the disappointment of losing a possible victory in TC America’s Race 1 at Sonoma and drove his Copeland Motorsport Hyundai Veloster N to a lights-to-flag win in the second race.
Started from the pole position, Filippi took the lead from the pair of the FCP Euro Volkswagen Golf GTI cars of Michael Hurczyn and Nate Vincent. Just like in yesterday’s Race 1, he was able to build up a small margin that was zeroed twice by the interventions of the safety car. But after the second restart, Filippi pulled away again and controlled the rest of the race.
Behind him there was a thrilling fight for the second position as Race 1 winner Victor González’s Honda Civic closed the gap from the FCP Euro men. Several times the Puerto Rican driver tried to overtake Vincent and eventually succeeded with four minutes left on the clock. By then James Walker’s Alfa Romeo Giulietta had joined the trio in fifth position.
During the penultimate lap, González overtook Hurczyn for second and so they finished with Filippi the winner from González, Hurczyn, Vincent and Walker.
Bryan Putt encored his sixth place overall and first in the DSG class at the wheel of his eEuroparts.com ROWE Racing Audi RS 3 LMS.
In the championship standings, Hurczyn has stretched his leading gap even further to 36 points over Vincent.
The next event of TC America will take place on July 12/14 at Portland International Raceway.