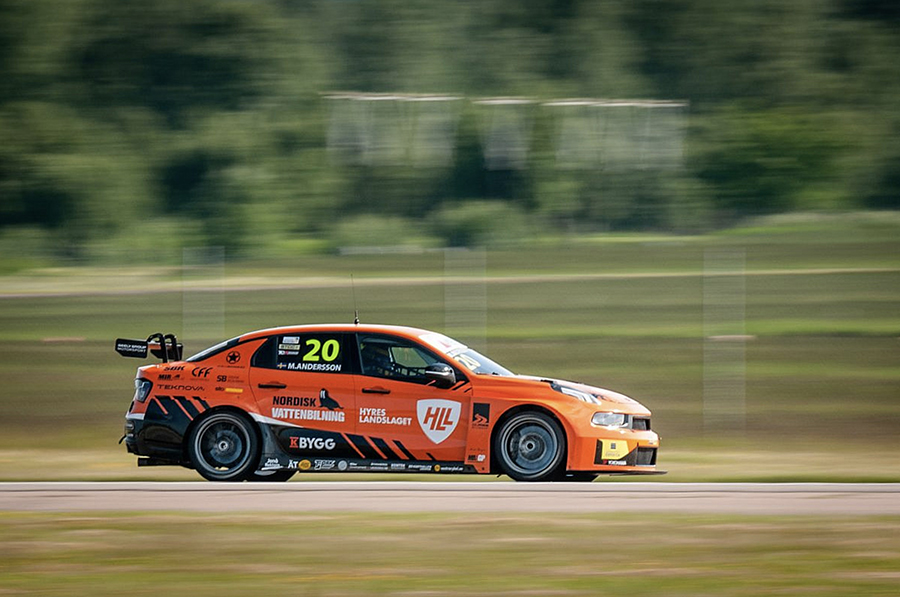 Mattias Andersson has claimed his first win with the Lynk & Co 03 in the third race of TCR Scandinavia at Ljungbyhed, which was packed with incidents and offs, leading to just six cars finishing on the lead lap.
Problems first struck Race 1 and 2 winner Robert Dahlgren, with the PWR Racing driver’s CUPRA failing to get away for the formation lap and would have to start from 13th and last on the grid.
As the lights went out, two of the Lestrup Racing Team Volkswagen cars of Oliver Söderström and Robin Knutsson both stalled in their grid positions. Behind each of them was one of the Brink Motorsport Audi cars; Tobias Brink just managed to miss Söderström, but Morin clambered right into the back of Knutsson’s car and both were immediately eliminated from the race.
Into Turn 1, Andersson swept into the lead in his MA:GP Lynk & Co ahead of the two Kågered Racing Volkswagen cars of Andreas Ahlberg and Hugo Nerman, with Mikaela Åhlin-Kottulinsky having made her way up to fourth.
Brink went side-by-side with the Volkswagen of Mikael Karlsson into Turn 1 but found himself running wide and collecting grass; Brink was forced to pit at the end of the first lap, with the Brink Motorsport team set for a disastrous race. Karlsson’s Volkswagen was sporting major damage to his left-hand side and would soon pit for repairs himself.
Dahlgren was now carving his way through the field, while Åhlin-Kottulinsky had more pace than the Volkswagen cars ahead of her and managed to pass Nerman on lap four with a move down the inside into Turn 1, the only passing point on the track.
The lady driver then set about passing Ahlberg, on lap 13 she made her move and was ahead into the corner when Ahlberg turned in and slammed into her rear-left wheel, breaking the car’s suspension; Åhlin-Kottulinsky was out of the race while Ahlberg returned to the pits to repair damage.
This promoted Nerman up to second, and Dahlgren now up to third despite starting last. Andersson would hold on to win the race, his first win since Mantorp Park in 2019; Nerman and Dahlgren completed the podium, while Söderström recovered to fourth.
The next event of TCR Scandinavia will be at Skellefteå on June 18/19.