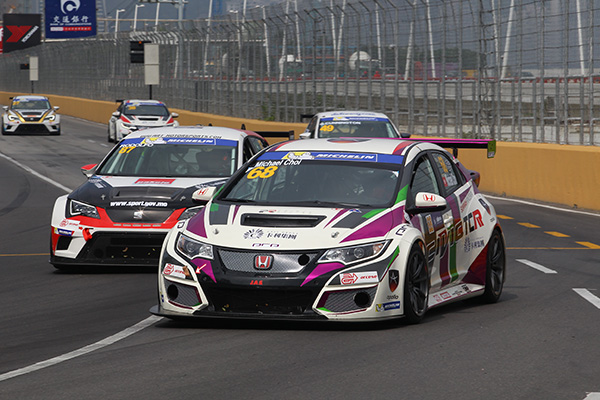 Prince Racing’s Michael Choi was crowned the first champion of the TCR Asia series. Although he retired in Macau’s second race after being involved in the pile-up at the start, the third place he achieved in the first race was enough for him to secure the title.
At the wheel of a JAS Motorsport-built Honda Civic, Choi had staked a claim on the title thanks to a brilliant streak of results in the first two events of the series. He finished third and second in Sepang and then scored a double victory at Singapore, which enabled him to defend his leadership from the return of Rodolfo Ávila who won both races at Macau in a SEAT León run by the Asia Racing Team. Eventually Ávila climbed to second in the standings, ahead of his teammate Philippe Descombes, which gave ART the Teams’ title.

“It was a pleasure to join TCR and competing with top drivers from around the world. I have learnt so much from them. Macau is one of my favourite circuits and I was very happy to claim the title there. I wish to take this opportunity to thank my team, Prince Racing and JAS Motorsport to provide professional supports and services, which allowed me to race without having to look over my shoulder. My only regret is that my partner and teammate, Kenneth Lau was injured in the crash. In the future, I would like to see more Asian drivers entering the championship that is one of the most exciting series with such a large variety of cars racing together,” said Choi.