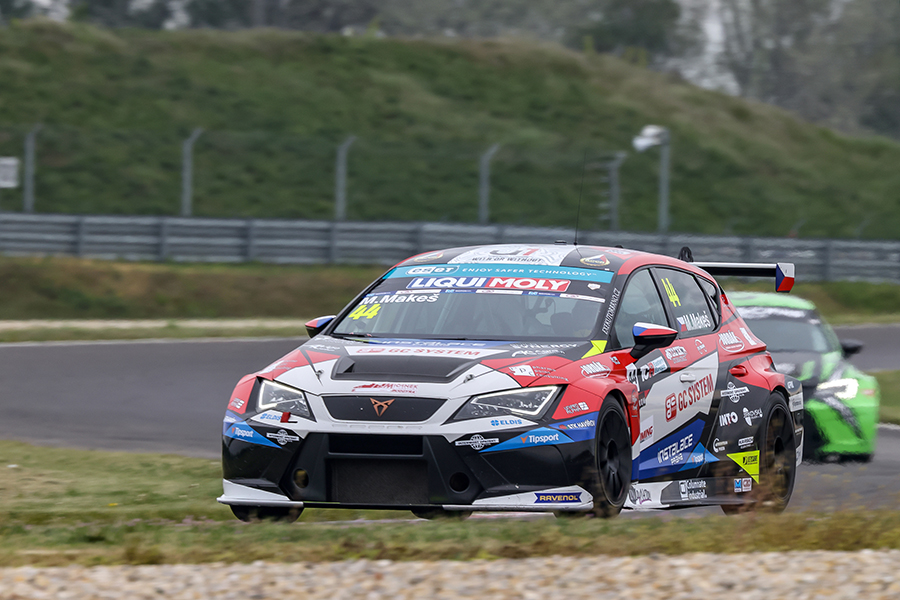 Michal Makeš claimed his first victory in TCR Eastern Europe at the Slovakia Ring. His Mičánek Motorsport CUPRA started from P3 and finished the race with a gap of more than eight seconds ahead of the German pair of Sebastian Steibel and Carol Wittke.
Starting from second on the grid, the points leader Tomáš Pekař made a great getaway, jumping ahead of pole sitter Milovan Vesnić. However, during the opening lap Pekař made a mistake a ran wide, dropping to fifth. Steibel too had taken an amazing start from P7, moving up into the third position at the end of the first lap.
Makeš was leading the field and the ranking behind him was: Vesnić, Steibel, Miro Horňák, Pekař, Petr Čížek and Carol Wittke, Giacomo Ghermandi’s LEMA Racing CUPRA retired with a technical issue.
Steibel began to chase Vesnić and made several attempts to steal the second place, while Horňák was able to retain his fourth position, keeping Pekař at bay.
In lap 7, Steibel finally went past Vesnić; Pekař tried to make the same move on Horňák, but he dropped behind Wittke who later overtook Horňák and climbed to P4. Vesnić’s Audi slowed in lap 8 and the former champion was forced into the pits and retired.
With Makeš comfortably in the lead, two battles enlivened the final laps. Steibel had to sweat in his defence of the second place from Wittke, while the fight for P4 saw junior Polish driver Tomasz Rzepeczki emerging ahead of Pekař and Horňák.
Despite finishing only fifth, Pekař retained the leadership in the standings, though Makeš has reduced the gap to seven points.
Race 2 will start tomorrow at 11:45 local times (CEST); live streaming at www.tcr-series.com. The CUPRA of of Žarko Knego will sit on pole position following the draw that reversed the top-nine finisher in Race 1.