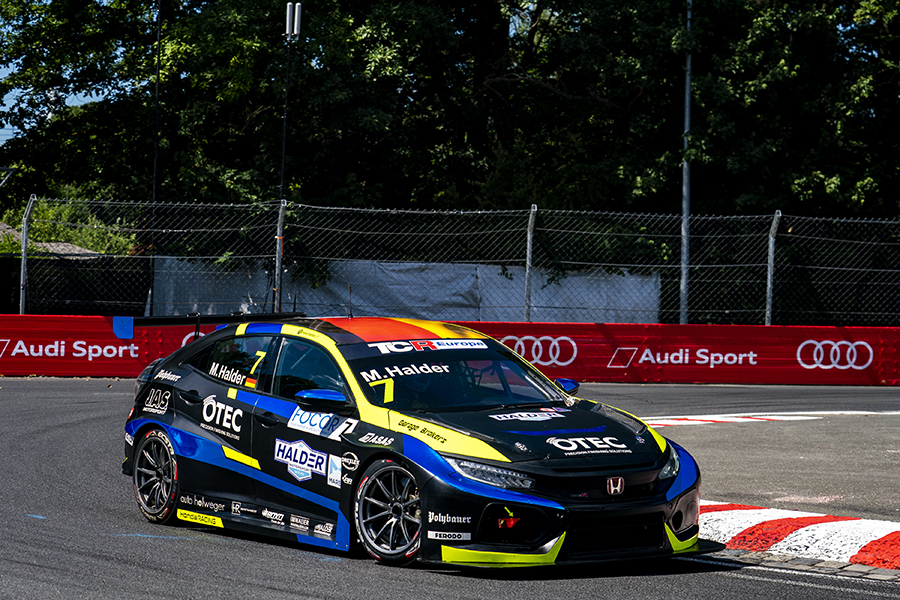 Mike Halder on pole for his home TCR Europe race

Mike Halder will start TCR Europe’s Race 1 at the Norisring from pole position after setting the fastest time in his Halder Motorsport Honda Civic Type R. Alongside the German driver will be the Target Competition Hyundai Elantra N of Felice Jelmini while Viktor Davidovski and Josh Files make up the second row of the grid. Thanks to the reversed grid, on pole position for Race 2 will be Klim Gavrilov’s Volcano Motorsport CUPRA Leon Competición.

Halder was the first to set a competitive lap time (56.177) in the twenty-minute Q1, with Jack Young (56.241) and Mike’s sister Michelle Halder (56.624) close behind in the other Halder Motorsport cars. The lap times quickly started to come down, however, with the Comtoyou Racing Audi RS 3 LMS cars of Davidovski (55.878) and Franco Girolami (55.942) going faster than the Honda cars. Girolami went fastest with a time of 55.221 with Mike Halder in P2 (55.338). The Janík Motorsport Hyundai Elantra N of Mat’o Homola then went quicker than Halder with a lap of 55.259 while Marco Butti went P5 in the Élite Motorsport Audi (55.391). As the session neared the halfway point, Halder went quickest once again (55.186) with Butti improving to P3 (55.252) and Isidro Callejas going P5 in the best of the Volcano Motorsport CUPRA cars (55.429). Then Girolami (55.175), Jelmini (55.121) and Callejas (55.051) took it in turns to go P1. Josh Files then went P2 with a lap of 55.055 and then his Target Competition teammate Jelmini went P1 with a 54.926 after Callejas had improved his best time with a 54.958. With less than a minute remaining, Halder went quickest again with a time of 54.921 before Jelmini immediately struck back with a 54.845. The CUPRA of Evgenii Leonov hit the wall and had to limp back to the pits for repairs; although the Volcano Motorsport car would go through to Q2, the damage couldn’t be fixed in time and so Leonov would play no part in the second stage of Qualifying. Right at the end of Q1, Davidovski went P4 with a lap of 54.970. As an indication of just how close things were, the top nineteen cars were within 0.8 of a second.

Race 1 is scheduled to start at 17:40 local time (CEST) and will be streamed live on TCR TV.