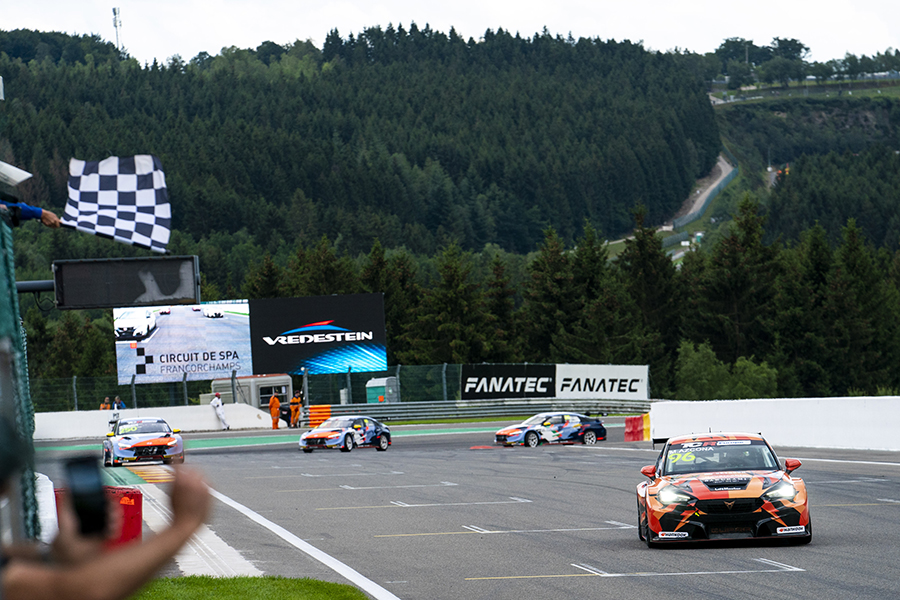 Mikel Azcona became the first two-time race winner of the 2021 TCR Europe when he took victory in Race 1 at Spa-Francorchamps. The result means Azcona retakes the lead of the standings from Franco Girolami, who finished the race in fifth place behind the three Sébastien Loeb Racing Hyundai Elantra N cars of Mehdi Bennani, Felice Jelmini and Sami Taoufik.
At the start, pole-sitter Jelmini was beaten to Turn 1 by both Bennani from P2 and Azcona from P4. Azcona and Bennani then ran side-by-side on the run down to Eau Rouge, with Azcona just edging ahead to take the lead. From then on, the 2018 TCR Europe champion was never really threatened. Bennani and Jelmini ran together for much of the race and finished second and third.
While the podium places were relatively straightforward, the battles behind were anything but. Even before the start lights went out, Mat’o Homola had received a drive-through penalty for infringing the grid procedure by driving through the pit lane on his way to the grid. Then, on Lap 1, there was an incident that saw the Honda Civic of Martin Ryba half-spinning across the track and both Jáchym Galáš and Sylvain Pussier saw their races brought to an early end as they crashed while trying to avoid Ryba. The Audi of Klim Gavrilov was also damaged in the incident after being hit by Galáš, but both the Russian driver and Ryba were able to continue. The incident brought out the safety car for two laps while the track was cleared.
When racing resumed on Lap 4, Jack Young had made up a place by passing Dušan Borkovič before crossing the line and so the British driver also received a drive-through penalty for the overtaking move while still under the safety car. Lap 4 also saw Evgenii Leonov run wide allowing Niels Langeveld to pass for P10 and then Leonov made contact with Young that resulted in a five-second penalty for the Russian.
A number of battles then raged throughout the remainder of the race, with Langeveld passing Tom Coronel for ninth on Lap 6 and then targeting Isidro Callejas in eighth. The Dutch driver eased passed the young Spaniard going into La Source at the start of Lap 7. Gavrilov, meanwhile, was recovering after the incident on the opening lap and passed Jimmy Clairet for eleventh on Lap 8.
The drama continued on the final lap, as Girolami seemed to have issues with a front tyre rubbing on the car’s bodywork. The problem got worse, but Girolami managed to hold Nicolas Baert’s Audi at bay, finishing fifth. Langeveld, meanwhile, tried to go around the outside of Teddy Clairet at the chicane for seventh place but the move didn’t pay off and so Langeveld had to settle for eighth.
But there was no denying Mikel Azcona the victory. He finished 2.6 seconds ahead of Bennani with Jelmini third and Taoufik fourth.
The second race will start tomorrow at 11:20 CEST with Klim Gavrilov on pole position; live streaming at www.tcr-series.com.